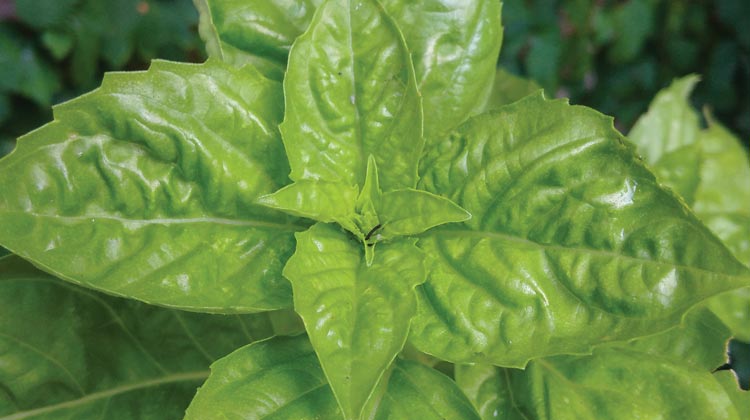 Basil, also known as the king of herbs

According to Culpeper, the French physician Hilarius said that it was “common knowledge” that sniffing too much basil would “breed scorpions in the brain”.

In the United States, the herb is commonly called bay-sil. Canada, as usual, is in a state of confusion about which is the correct pronunciation – take your pick: bay-sil or baa-sil, they both taste the same.

Basil has its place in mythology. A sprig of basil was placed in the hands of the dead in Europe to ensure a safe journey to the other side. In India, it was placed in the mouths of the dying to ensure they would reach god. Basil was said to represent hatred in Greece, but it was also used in bouquets to announce love in certain other European countries.

Too much water or too much or too little fertilizer can result in yellow leaves at the bottom of basil. The plant is also cold sensitive. Even a light frost will kill it. Basil likes bright sunlight and well-drained soil. You can propagate basil by taking cuttings, just as you would any houseplant. This will keep immature basil growing all winter, as long as you can provide enough light to keep it happy. Place the cuttings in a sunny window in a water glass (change the water every other day) for 7 to 10 days to get roots, then pot up the new plants.

Unless you plan to use the seeds, don’t let basil go to flower. When a stem flowers, leaf production stops, oil production declines and the stem turns woody. Pinch back frequently to keep leaf production active – and take cuttings to start new plants so you can have several crops from each plant, all young and delicious.

Most of the basil varieties we purchase are annuals, although there is a perennial variety, Ocimum kilimandscharicum × basilicum ‘African Blue’ that is occasionally offered. This is a hybrid from Africa with a camphor scent. It must be propagated from cuttings as its seeds are sterile.

There are many other varieties of basil. It can come as a small bush with small leaves, or the large sweet-leafed basil we see in grocery stores. It can be purple-leafed, hairy-leafed, or silvery-leafed. It can have overtones of lemon, cinnamon, peppermint, cloves, licorice or anise.

The sweet basils are generally used in Italian cuisine, the lemon basil in Thai cooking and the holy basil, with its clove-like flavour, used in Asian foods. Its seeds can be soaked in water to produce the gelatinous product used in Asian drinks and desserts. Milk steeped in basil has been used to make an interesting tasting ice cream. It is also sometimes used to flavour chocolate.

Extract of basil is toxic to mosquitoes and is used as a repellant. One recipe: a handful of basil leaves and four ounces of hot water. Steep, drain and mix with some alcohol when the water turns green. Even if it doesn’t work, you’ll smell so good, no one will be able to resist you!

Preserving basil by drying it is a bad idea because the aromatic oils are quickly lost. Instead, freeze fresh basil (many books recommend blanching but the leaves freeze well without this extra step). You can also chop the leaves and freeze them in ice cubes. Making a big batch of pesto and freezing that is another way of keeping the goodness of the leaves well into winter. Layering the leaves in salt preserves their flavour, although it will give them a papery texture.

Dorothy Dobie is the publisher of Manitoba Gardener magazine. You can subscribe at localgardener.net or call 204-940-2700.