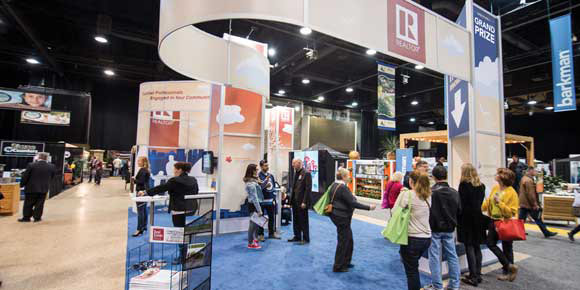 Home and Garden Show will provide plenty of excitement

All systems are go for the Winnipeg Home and Garden Show in the new section of the RBC Convention Centre from April 1 to 3.

Presented by REALTORS® for the second straight year, the show figures to be even bigger and better than the 2015 show, formerly known as Home Expressions.

“From what I’ve seen, our great group of Realtor volunteers is ready to do their part to help hit the show out of the park,” said WinnipegREALTORS® director of public affairs, Peter Squire. “They’ve been unbelievable in preparing for the show. Everyone is excited about doing their part to put on a great show for the public.”

Realtor Linda Mackie, who has been organizing volunteers for the show along with fellow Realtor Sherri Baldwin, said they’ve had to literally turn away volunteers.

“We had 46 volunteer spots, and they all filled up in just a day or two,” she said. “In fact, there were so many volunteers — everyone was so excited about the prospect of being able to help out at the show — we had to cut down the shifts and limit them to one shift per person to give everyone a chance to come out and help.”

One of the show’s highlights will be its grand prize, a playhouse courtesy of Realtors, Renovations Plus and Everitt Design Associates, said the Manitoba Real Estate Association’s (MREA) director of communications and public affairs, Toby McCrae.

“People will never have seen a playhouse like this one because there’s only one in the world,” she added.

McCrae said that the designers at Everitt Design Associates and carpenters at Renovations Plus have created a functional masterpiece that kids (both young and old) will enjoy.

“This one-of-a-kind, modern designer playhouse is worth more than $10,000, weighs more than 3,000 pounds, and is over 10 feet tall. It comes complete with interior design, carpet, lighting, furniture, skylight, climbing wall, climbing rope, hidden doorway, wraparound L-shaped window and crank window. It will be delivered curb side to one very lucky winner within city of Winnipeg limits. The draw will be held April 4.”

Realtor Josh Nekrep said the winner of the draw will have a hard time keeping their kids out of the imaginatively designed structure.

“It’s a very cool design,” he said. “Whoever wins won’t have something like it for their kids. They’ll be mesmerized by all its cool, interactive features.”

Another cool show feature figures to be the Realtors-sponsored Real Estate Experts Panel, which will convene on the Urban Barn Main Stage at 2 p.m. on Sunday.

“The whole idea behind the panel is to discuss issues that are relevant to the home-buying public,” said Elston. “Our goal is to make it as interactive as we can. Panelists will each be given one or two topics to address, and there will be a chance for a Q & A session, as well. Timing should be good for the panel at 2 p.m. on Sunday, and it should showcase the expertise of all our panelists.”

The show will also showcase Realtors at their best, said Nekrep.

“People can feel free to drop by our display area to talk about the market in general, the market in their area, or just get some professional advice from one of our Realtor volunteers,” he said. “Realtors are involved in communities across the city. We want to do what we can to help to make them a better place to live.”

The show will also feature its fair share of star power. Carson Arthur, star of HGTV Canada’s new series Home to Win, will be on the Urban Barn Main Stage on Saturday, April 2, at 1 p.m. and 7 p.m., and Sunday, April 3, at noon, to discuss a variety of sustainable landscaping topics.

W Network’s Jillian Harris and Todd Talbot, from Love It or List It Vancouver, will also be taking to the Urban Barn Main Stage on Friday, April 1, at 7 p.m. and on Saturday, April 2. Tickets for the show, presented by Realtors, can be purchased online at www.winnipeghomeandgardenshow.com