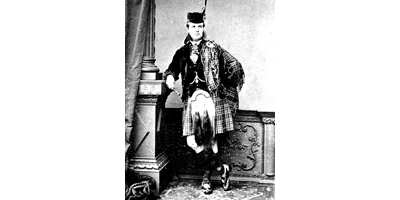 Where to go to escape the pervasive reach of American justice and one of that nation’s richest men? It was a question plaguing a man who gained notoriety using the name Lord Gordon Gordon.

When he cast his gaze about for a safe haven, the alleged member of the nobility decided upon a sleepy town on the edge of Canada’s western frontier. After the man with a dubious pedigree arrived in Winnipeg, he insisted he was a Scottish “laird,” meaning he was from the moneyed land-owning class in the Old World.

But the so-called Lord’s nefarious past would eventually catch up to him. To thwart answering for his sins, Lord Gordon would suffer an inglorious death, taking his own life with officers of the court waiting for him to emerge from his hideaway in Headingley.

As his life underwent later investigation, it was revealed that Lord Gordon Gordon had used numerous aliases, including Lord Glencairn, Herbert Hamilton, George Hubert Smith and Gordon Harcourt Gordon, as he plied his confidence games in Scotland, England, the United States and Canada.

His greatest claim to infamy was convincing American multi-millionaire Jay Gould to part with nearly $1 million. Among the pantheon of the U.S. business elite, Gould was noted by U.S. newspapers as the chief robber baron among a cast of characters publically-lampooned in newspaper front-page cartoons for their avarice. Next in order to Gould on the greed scale and rating public derision were J.P. Morgan, Cornelius Vanderbilt, John Rockefeller, James Fisk, Daniel Drew and Andrew Carnegie.

The wealthiest of the bunch was Rockefeller, who went on to control 95 per cent of the oil business in the U.S. Being a deeply religious man did not prevent Rockefeller from using unsavoury methods to corner the oil business, forcing others to bow in submission to his all-mighty monopoly of the oil marketplace.

Gould didn’t pretend to be religious, although if he followed any god, it was named “money.”

With the exception of Gould, the robber barons in the later stages of their lives attempted to buy their way back into Heaven by using their wealth for philanthropic purposes. Steel magnate Carnegie donated money to build libraries across North America, including two in Winnipeg. Rockefeller established a multi-millionaire foundation which is still active today.

The pursuit of money at all costs undoubtedly allowed Gould to fall into the trap laid by Gordon; after all, greed is the con man’s best ally when pursuing a victim.

In 1867, Daniel Drew added Gould and Fisk to the board of directors for the Erie Railroad, which was called the “Scarlet Woman of Wall Street,” because its stock was continually manipulated to line the pockets of Drew and company.

Vanderbilt, who started out amassing a fortune in shipping, earning him the title commodore, tried to take over the Erie by buying up its stock. The trio from the Erie countered Vanderbilt’s buying spree by printing thousands of extra shares, effectively watering down the value of the stock.

Incensed by their action, Vanderbilt got a New York judge on his payroll to forbid the issuing of new stock. The judge signed a warrant for the arrest of Fisk, Drew and Gould, but they evaded the  law by fleeing across the Hudson River to New Jersey where the judge’s warrant could not be enforced. With $7 million of Vanderbilt’s money in their pockets, the men took up residence in a New Jersey hotel. They then hired policemen armed with cannons to serve as a deterrent to anyone attempting to force them to recross the river.

The hostile takeover made its way through the legislatures of both New York and New Jersey, where money was spread around to bribe legislators. When Gould turned up in Albany, the state capital and site of the New York Legislature, the New York Herald reported he was carrying a trunk “stuffed with thousand-dollar bills which are supposed to be used for some mysterious purpose in connection with the legislation.”

The final outcome was that the stock issued was approved by the New York Legislature, which dealt a deathblow to Vanderbilt’s takeover bid, but the “commodore” did manage to sell his 100,000 shares in the Erie Railway to London investors. Other investors in the Erie lost thousands of dollars due to the watering down of shares by Fisk, Drew and Gould.

Gould’s most famous bid for increasing his wealth came when he, partnered with Fisk and the brother-in-law of U.S. President Ulysses S. Grant, attempted to corner the gold market. Grant’s brother-in-law was enlisted to keep the president in check and prevent him from releasing the $100 million in federal gold from Fort Knox onto the market which would have put an end to their scheme.

Once they had cornered the market, their goal was to sell off their accumulated gold and realize  an enormous profit resulting from their ability to manipulate the price of the precious metal. They amassed $7 million in gold, driving the premium up by 160 per cent.

But Grant caught wind of their scheme. He realized their greed would bring economic ruin to the nation and authorized the release of $2 million from the federal reserve. Despite Grant’s attempt to stave off the manipulation of the gold market, it was rumoured that Gould made a profit of $10 million by selling off his gold when the market price for the yellow metal was at its peak.

The result of the gold scheme was the panic of “Black Friday” on September 24, 1869, which threw the country into a deep recession. When people became aware of Gould’s role in the market’s collapse, an angry mob attacked him on the street in New York. After this fright, Gould only travelled in the company of a bodyguard.

Gould then turned his attention to western railways, buying stock in the Union Pacific until he controlled the company. Eventually, Gould would become a director of 17 railways and the president of five. He also owned the New York World newspaper and held major investments in New York City’s elevated railways system, as well as several telegraph companies, including Western Union.

Lord Gordon Gordon made his way to New York in this highly-charged atmosphere of stock speculation and the unbridled accumulation of wealth by a select few. But before he could reap his own ill-gained profit, Gordon took a side trip to Minnesota in the summer of 1871 where he courted the American West’s high and mighty.

Gordon registered in a Minneapolis hotel under the name G. Gordon and deposited $20,000 in English pounds in the National Exchange Bank of Minneapolis, which was known locally as Westfall’s bank.

Gordon related a scheme to settle 100 Scottish families in Minnesota to Col. J. Loomis, the land commissioner of the Northern Pacific. According to Gordon, the generous benefactor of the settlement was his own titled sister in Scotland.

Loomis invited Gordon to accompany him on an excursion with railway surveyors George B. Wright and Nathan Butler.

“The adventurer went to Pelican Falls, Otter county, Minnesota,” wrote Manitoba author George Bryce in his book, The Illustrated History of Winnipeg (1905), “and lived in great state with a large retinue under canvas, in company with the Commissioner of the Northern Pacific Railway. He was represented as of enormous wealth, and was most artful in providing it.”

The Fergus Falls Daily Journal described the excursion as “a caravan of forty horses, twelve men to pitch tents, a French cook and a number of colored waiters wearing white linen aprons and white silk gloves.”

The staff was told to only address Gordon as “My Lord.”

They travelled in style befitting royalty, which was the point of Gordon’s con to pass himself off as being among the British privileged class.

It was reported that Loomis spent $45,000 to fund the two-month long trip to Pelican Rapids, Oak Lake and Detroit Lakes. The colonel justified the expenditure to the railway’s board by saying Gordon was prepared to invest $5 million (Putnam’s Magazine January 1910 article by Dr. William A. Croffut, who had been the editor-in-chief of the Minneapolis Tribune from 1871 to 1875).

By the end of the journey, 50,000 acres in Ottertail County was surveyed. In addition, a town site was laid out to be named “Loomis” after the colonel.