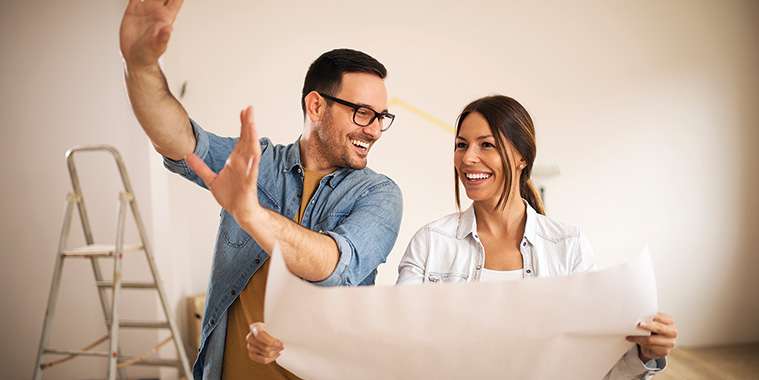 Seven lessons learned while tearing down and rebuilding my house

When my husband and I bought our first home 11 years ago, we knew it needed some work. Yet after a decade of mulling over possible remodels, last year we took a much more drastic approach: We tore down the house and built a new one in its place.

Most people thought we were crazy, but we knew it was the best decision for us. We lived in a walkable neighborhood with oak tree-lined streets and shops and restaurants just a few blocks away. We loved our neighborhood, and we wanted to stay.

But the house, built in the 1940s, just wasn’t right for us. The walls were riddled with knob-and-tube wiring, and there were a slew of plumbing issues. It also was just too small for our family, particularly since I work from home.

Once we added up all the small jobs we wanted to do, we realized that tearing the house down and starting from scratch would cost about the same price as a renovation.

The whole process took a stressful and exhausting eight months. But now we have a beautiful, brand-new home.

It was all worth it, but if I had to do it again, I’d definitely do a few things differently. So if you’re thinking of going this route, here’s my advice for surviving it all.

1. Figure out exactly what you want before you start

At the outset, we’d met with our building contractor about a bathroom remodel and possible extension — because that’s all we thought we needed. But because the bathroom shared a wall with the kitchen and we’d have to redo all the plumbing and electrical anyway, it “made sense” to redo the kitchen as well. While we were at it, we figured we could add a master suite. So, we met with an architect and had plans drawn up.

That’s when we talked to our builder again and realized that demolishing the old house and starting over wasn’t that much more expensive. So we met with the architect again, and got another set of plans.

I wish someone had encouraged us to step back and think carefully about what we really wanted upfront, taking into account current and future needs, and budget. That way, we could have done just one building plan rather than two.

2. Shop for everything upfront, right down to the door hinges

Building a house comes with countless decisions — everything from door hinges to flooring, tiles, paint colour, windows, and more. Make as many decisions as you can early in the process, and that will give you a better idea of how much the project will cost.

To prioritize, figure out which rooms or items are most important to you. For us, that was the kitchen. My husband and I both like to cook, so we spent more there, choosing a pricey farmhouse sink and quartz countertops.

Don’t be afraid to ask questions of your building contractor and any subcontractors, no matter how obvious the answer might seem. After all, your money and future home are at stake.

Take our back porch, for example. On the plans, it looked like it was at ground level, and we assumed that it was. It turned out to be more than 5 feet off the ground, meaning we had to get a rail, which wasn’t in the initial budget.

4. Neighbours may cause drama

Before we tore down our house, we informed the neighbours on either side of us and apologized in advance for the inconvenience. They were incredibly patient and wished us well. However, the neighbours a few doors down, whom we didn’t even know, would let their daughter, who was maybe 6 or 7, play on our construction site. One day, I pulled up to find the girl bouncing around the site wearing a child-size hard hat!

I’m not sure there’s a solution for neighbours with a foggy sense of boundaries, but if you’re building, be sure that the site is as secure as can be. We fenced off our construction site and posted “No Trespassing” signs. It’s also a good idea to inform the whole block about the project, with a reminder about the dangers of a construction site.

This is something I can’t emphasize enough: Check everything — each invoice, list of materials, quotes, and anything else. Chances are, something will be wrong, and problems found early are much easier to fix. In our build, the quote for doorknobs included the wrong count, and the window quote listed windows with the wrong grid pattern. A quick phone call remedied these issues before anything was ordered, delivered, or installed.

6. Utility companies will be a headache

Dealing with the utility companies was one of the biggest, most unexpected headaches of the teardown and rebuild. They gave us incorrect information and didn’t keep their scheduled appointments to disconnect utilities and then reconnect them, which delayed the demo and other parts of the construction. I called them so many times that I had the numbers and automatic phone system menus memorized.

My advice: Start contacting them early in the process, verify what they tell you, and follow up a lot.

7. Work with your partner, as best you can

The stress of building a house can’t be emphasized enough. All the decision-making, meetings with different subcontractors, delays, and other issues can be overwhelming.

Luckily, my husband and I agreed on everything designwise. We didn’t do as well with coordinating who was going to do what. Since I work from home, I attended most of the meetings. But that meant having to relay information back and forth and then having to delay actual decisions until I could talk to him.

Looking back, I wish we’d created a plan outlining the specifics of who would do what and how decisions would be finalized.

About eight months after the teardown, we moved back to our neighborhood and into our brand-new home. It has more than double the square footage, with a lot more windows, a garage, and a nice office for me. While it was a long road, we love having a home we’ve chosen — right down to the doorknobs.