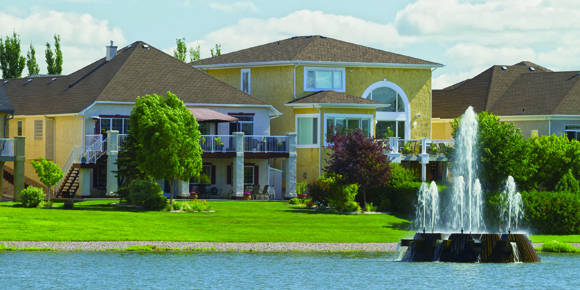 Buyers intending to build a luxury home in Winnipeg are rushing their plans in order to avoid paying the city’s new impact fee, according to the latest monthly report released by WinnipegREALTORS®.

The impact fee comes into effect on May 1 in new suburban areas of Winnipeg.

“One price range that did unusually well in February was for home sales over $1 million,” said Peter Squire, the association’s market analyst.

Squire said just one $1-million home was sold in February 2015, while in the same month last year, there were no sales of homes in this price category.

“This year, there were seven and this significant difference is the first clear indication of the city’s new impact fee on new residential property,” added Squire.

Five of the seven $1-million sales in February were new homes.

Squire said this was unusual for any month of the year.

The fee is designed to raise revenue to offset the costs the city incurs when it has to build new infrastructure — such as regional roads, sewers, transit and recreation and leisure facilities — for new subdivisions.

On the other hand, local developers say they already pay for infrastructure costs and the new fee will only curtail new home starts.

In January, the Manitoba Home Builders’ Association and the Urban Development Institute have filed a challenge against the fee in the Court of Queen’s Bench, claiming the city doesn’t have the authority to levy the fee under the terms of its charter, which was enacted by provincial legislation.

WinnipegREALTORS® president Blair Sonnichsen said new and existing condominium sales will also be affected by the impact fee, which is already being reflected in a jump in sales for this property type.

The association reported that condominium sales were up 33 per cent year-to-date and dollar volume has jumped 37 per cent.

“Not only are we coming off a record-setting year (2016),” said Sonnichsen, “but we are faced with new challenges in stricter mortgage qualifications and new city of Winnipeg impact fees on residential property.

“While it’s too early to tell at this juncture of the year, it is apparent some substitution to more affordable property types (such as condos) is occurring and buyers are aware of Winnipeg’s new impact fee,” added Sonnichsen.

Squire said there are plenty of condo listings, so the expectation is that strong sales will continue well into the year.

“With the exception of 2016, when the condominium inventory was 12 per cent higher than the current 665 condominiums on the market, the number of listings available are elevated over previous years,” added Squire.

The association reported that residential-detached, or single-family, homes sales have not kept up with last year’s record-setting pace.

Listings entered on MLS® for the first two months decreased by six per cent, while sales were down by eight per cent.

According to the association, housing demand will continue due to the rise in immigration to Manitoba.

Statistics Canada Census data for 2016 showed that Manitoba’s population was growing faster than the national average.

Winnipeg’s population growth from 2011 to 2016 was 6.6 per cent, which was actually below the provincial average by one percentage point.

What really stood out, according to the association’s report, was that municipalities in the Capital Region were witnessing even stronger growth — Steinbach’s population increased by 17 per cent, Niverville’s by 26.6 per cent, St. Anne’s by 30 per cent, Blumenort’s by 19.3 per cent and Ile des Chenes’ population rose by 21.1 per cent.

“Winnipeg has always been in our name since WinnipegREALTORS® incorporated in 1903,” said association CEO Marina James.

“However, our MLS® market area encompasses the entire Capital Region (city and surrounding municipalities). We, therefore, are well attuned to the growth taking place outside Winnipeg.”