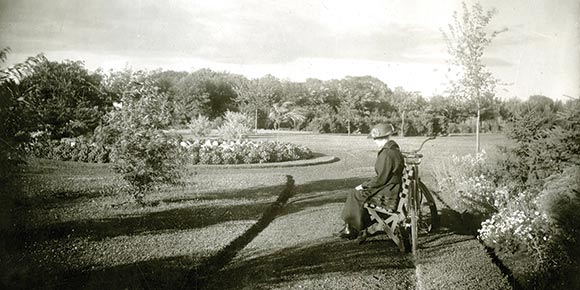 It is hard to imagine Winnipeg without Kildonan Park. Yet during its first decade, economics and international events intervened to impede its development and on a couple of occasions nearly wiped it off the map.

Soon after George Champion became Winnipeg’s Parks Superintendent in late 1907, he recommended that the Parks Board act quickly to purchase land north of the city for a new park. He was concerned by the rapid urbanization of north Winnipeg and the Municipality of Kildonan and felt that the opportunity for a northern park would soon be lost forever.

The Parks Board responded and in November 1909 took possession of 71 acres of land along the Red River and had several smaller land deals in the works. Champion was then tasked with drawing up a master plan for the site.

When it came to the natural setting, Champion’s work was relatively easy. The site was already one of outstanding beauty with wooded groves, natural lawns, a meandering creek and bordered by the Red River. Only minor work, such as brush clearing and trail construction, would be needed to begin attracting crowds.

Champion’s master plan called for the eventual construction of several structures. These included a grand avenue leading to a three-building pavilion, a concert bandshell, formal gardens, an aviary and a boathouse with two docks on the river.

Before work even started, the whole idea of a northern park was nearly scuttled.

The city felt that the municipality and area residents had not been particularly helpful throughout the process of creating the park. The municipality, for instance, wanted to tax the city on the land even though it had annexed it. The last straw was when one private landowner who was to sell them a crucial eighteen-acre lot doubled his asking price at the last minute.

In early April 1911, the Parks Board decided it would be easier to sell off the land they had amassed and look for a new site along the Red River south of the city. “Kildonan Park for sale” ads appeared in newspapers for about a week before the city solicitor convinced councillors to make one final “take it or leave it” offer for the private land at a less inflated price. They did, and the landowner accepted.

With the land question settled and a great deal of work done to make the site accessible, the Parks Board formally opened the 97-acre Kildonan Park on May 24, Victoria Day, 1911.

Even though its amenities had yet to be built, the new park proved a great success by drawing thousands of nature enthusiasts and picnickers that first summer. A Winnipeg Free Press reporter wrote, “Wild in the beauty of unrestricted nature, Kildonan Park will in time become the most beautiful of Winnipeg’s big recreation grounds.”

There were others in the city who had their eye on Kildonan Park but with very different intentions.

The Industrial Exhibition, a city institution that dated back to 1891, was in trouble. Its grounds in the North End were too small and its collection of buildings were collapsing due to age. Some in the business community and on council saw this new park as the perfect solution to these problems.

The Kildonan Park site, plus another 50 or 100 acres of adjoining land, could become the Exhibition’s new home featuring a fair ground, race track and numerous exhibition buildings. The estimated cost of the transformation was $1.5 million, which is $33 million in today’s dollars.

The first step in the process was to get approval from taxpayers through a referendum to spend $500,000 to acquire the additional land. A hard-fought yes / no campaign waged throughout the late summer and on September 13, 1912, they voted 1,435 to 757 in favour of the expenditure. Kildonan Park was defunct, much to the dismay of Champion and the Parks Board.

For proponents of the new Exhibition grounds their timing could not have been worse.

In 1913, the city fell into a deep recession when world grain prices plummeted. The result was that spending on many civic projects, including the new Exhibition grounds, was put on hold. This was followed by the First World War during which the Exhibition organization folded after its property was taken over to become a barracks and training ground for a thousand troops.

With the threat to the park’s existence on hold, the Parks Board introduced some amenities during the war years, though not on the scale that Champion’s master plan called for.

In 1915, a new Main Street entrance allowed for easier access to the park and a scaled-down pavilion provided permanent washrooms and a concession area. Also around this time, formal gardens and sports fields were introduced, and a temporary bandshell, picnic shelters and boat dock were built.

It wasn’t until the mid-1920s that serious attempts were made to revive the Exhibition, but the level of interest and funding that existed before the war was just not there. “The Ex” eventually found a new, smaller home at the Polo Park race track grounds.

Even if the Exhibition’s reincarnation had been successful, it is unlikely that Kildonan Park would have become its new home as by this time it had established itself in the hearts and minds of thousands of Winnipeggers as one of the city’s premiere pleasure spots.