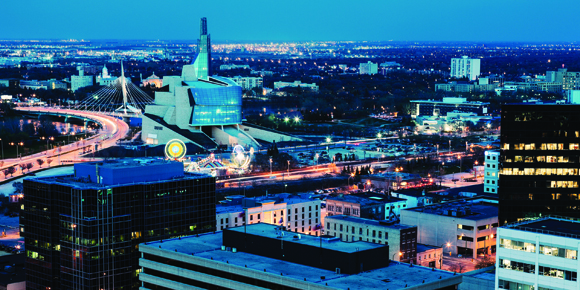 For the first time in 13 years, Winnipeg will be hosting the Federation of Canadian Municipalities’ (FCM) Annual Conference & Trade Show.

When the conference gets underway — it will run from June 3-5 at the RBC Convention Centre — more than 1,500 municipal representatives from across the country will gather to attend the event, which will focus on the central role played by municipalities in building great communities and a strong, prosperous nation.

One municipal representative who will be front-and-centre at the conference is none other than Winnipeg city councillor (Fort Rouge – East Fort Garry) Jenny Gerbasi, currently the second vice-president of the FCM.

Gerbasi, who is likely to be acclaimed as FCM president roughly a year from now, said she and the conference’s planning committee can hardly wait for the four-day-long event to get started.

“We actually put in a bid to host the conference five to six years ago,” she said. “The bid was successful, and we’ve been planning intensely for the last year or so. Everyone is proud to be hosting the conference, and excited about showing visitors just how much the city has changed for the better in the 13 years since we last hosted the conference.”

While the conference will serve as a catalyst to kick federal-municipal consultations into gear for phase two of Ottawa’s 10-year investment plan — the consultations will play a crucial part in ensuring that the next phase of funding delivers the resources that municipalities need to grow and improve — Winnipeg will also be in the spotlight, said Gerbasi.

“The conference will offer a variety of things, among them study/companion tours that will allow conference-goers an opportunity to see the city in a variety of different ways,” she said. “So much has changed in the city since 2003. People will be able to visit the Canadian Museum of Human Rights, Journey to Churchill at Assiniboine Park, see the city’s rock n’ roll roots, tour historical St-Boniface and explore our wonderfully-preserved heritage buildings, and that’s just the start of what’s available. There’s so much to see.”

At the same time, municipal officials from across Canada, from mayors to councillors to administrators, will be going about the serious business of laying the groundwork to work with the federal government in the pursuit of creating better communities.

Thanks to the FCM, which has been lobbying on behalf of municipalities since 1901, the level of collaboration is projected to be high.

“The purpose of the FCM is to bring together all the concerns of municipal sectors from across the country and bring them together in one, strong unified voice,” Gerbasi said. “As time has gone on, the FCM has become an influential voice in Ottawa.”

So much so, that everyone on Parliament Hill is listening.

“Not only has the federal government listened to what we have to say, but all parties have listened to many of our suggested ideas. Because those ideas have made sense, they’ve made every effort to work with us to implement many of those suggestions.”

Not only has the federal government become more receptive to the varying needs of municipalities across the country, but they’ve also listened to the FCM on other key matters.

“We came forward with a positive, solution-based message on issues like infrastructure, transit, climate change and housing during the federal election campaign, and the message was heard,” said Gerbasi. “All the advocacy work the FCM had done over the years paid off. Everyone associated with the FCM feels like they’re part of a positive effort that goes beyond their own communities.”

One issue on the table will be affordable housing, a long-time priority of the FCM. The 2016 federal budget saw a shift toward prioritizing investment in social housing in the short-term, and commitment to start working toward a long-term National Housing Strategy, all thanks to the ongoing efforts of the FCM. The hope is that as the federal government works with municipalities, the need for more and better social housing will eventually be met.