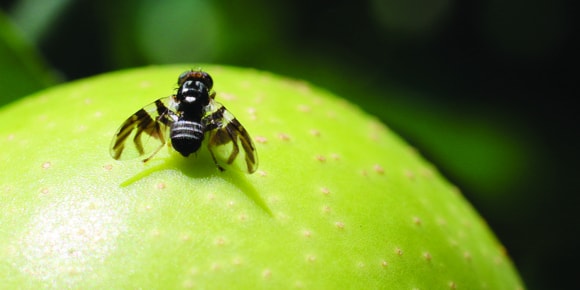 Dealing with an infestation of apple maggots

Getting a good crop of apples every year is just not a possibility unless you have more than one tree, so it is doubly heartbreaking to have the good crop year infested with apple maggots (Rhagoletis pomella).This pest is also known as railroad worm.

Apple maggots are native to North America and were originally hosted by the wild hawthorn, but they are now the primary pest of apples. They are also known to infest plum, pear and sometimes cherries. Crabapples are often riddled with them.

The adult fly is small at one-quarter inch long. It is black with a red head, white stripes on its abdomen and black-banded, clear wings.

Apple maggots pupate underground and emerge as flies starting about July 1, or when the temperature remains above 10°C for some period of time, and continue throughout the summer. They deposit their eggs just under the skin of the fruit, with each female laying hundreds of eggs. Eggs hatch in five to 10 days and then the maggots develop slowly over the next three to four weeks.

Timing is everything in catching the adults with an insecticidal spray. To find out when to spray, the apple grower can hang a sticky flytrap or a red ball covered with Tanglefoot in the tree.

The females lay their eggs eight to 10 days after emergence, so spray the tree with insecticide immediately once the first fly emerges and continue the treatment. You can spray in late June, mid July, late July and mid August. The fly drinks moisture left on leaves and will ingest the poison in the water.

You can also use the traps to catch as many adults as possible. The simplest method is to buy red apples, cover them with Tanglefoot and hang them in the tree, one to every 100 apples and four to eight traps per tree. Get them up by the end of June and refresh the Tanglefoot or replace the apples frequently.

Apple maggot infestations are difficult to treat because the maggot leaves the apple only after it has fallen to the earth and moves underground soon after to pupate. Some of them may also lay dormant in the soil for a second year, so you need to be diligent and determined to get them all. Other than spraying, the best control is to pick up fallen apples immediately and dispose of them in a sealed plastic bag.

One line of defense is to bag the fruit, tying baggies around apples to keep the adult fly at bay. Be sure to snip the corners to allow any water to drain out. If your tree is large, you can bag the fruit that is low hanging and leave the crop at the top for the flies to have a field day.

Do this after thinning. Thinning is designed to get the maximum-sized fruit. To thin, remove most of the fruit from each cluster, leaving the “king” fruit, which is usually the one in the middle of the cluster — thin and then bag.

As for getting a good crop, apples typically put out a heavy harvest one year, followed by a light one the next, so in addition to the benefits of cross-pollination, planting two trees will hopefully give you the advantage of always having apples for your favourite apple pie.