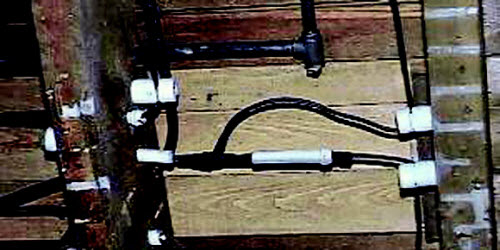 It’s a term that breeds concern among those considering the purchase of a classic, turn-of-the-century-era home: knob-and-tube wiring.

That concern is justified, according to Chuck Lewis, owner of Mr. Electric, one of the city’s most trusted knob-and-tube removal companies.

“No question, insurance companies definitely have concerns over the safety of it,” he explained. “Some won’t provide coverage for it at all, while others will want a thorough inspection of a system to ensure its safety.

“Two things can happen after that inspection: your insurance will likely be more expensive, and you may be required to replace the system. It all depends. With some homes, you might not need to do the whole home, while you might with others.”

Lewis said that buyers need to be aware of not only knob and tube, which is largely in homes built between 1900 and 1920, and a pair of other wiring systems utilized in homes between 1930 and 1955.

“All three systems are not grounded, which is a safety concern in and of itself. The big problem with knob and tube and these other systems comes when someone who doesn’t know what they’re doing tampers with the system to meet their needs (i.e., more electrical outlets).”

He said that major problems can occur when such systems are modified by unqualified do-it-yourselfers.

“People will tie into it or insulate over the knob and tube. Doing that can break down the outside sheath, and hot air vents can heat up wires, making for a potential fire hazard. Or, they reverse polarity, which causes arcing or sparking. Some people have even put knob-and-tube wiring straight into an electrical box.

“All these scenarios set up conditions that are perfect to create a possible fire hazard,” he added.

What happens if a 60-amp knob-and-tube system is left alone?

“It should be fine if it’s not tampered with,” said Lewis.

The key to avoid both insurance and fire hazard problems is to get an inspection done if there are concerns knob and tube (or other ungrounded wiring systems) are present in a home, said Reider.

As for the cost of removing knob and tube, Lewis said costs vary, and the removal process isn’t as messy as some make it out to be.

“Cost per day for removal is approximately $1,000. It’s a labour-intensive process, so it isn’t fast, and (the) cost of the job usually depends on the size of the home.

“The way I look at it, you’re getting a well-built, character home — it just needs an upgrade,” he added.

As for the perceived mess and the wisdom of getting an inspection done?

“We might put a small hole in maybe five or six spots, and work hard to make our work as unobtrusive as possible,” said Lewis. “The important thing is to hire a qualified company to get the work done right, not some guy off Kijiji.

“If you have any doubts about knob-and-tube wiring in a home you’re thinking of buying, get it inspected. Doing that could save you a lot of time and money.”

• An explanation of knob-and-tube wiring from Wikipedia: “It consisted of single-insulated copper conductors run within wall or ceiling cavities, passing through joist and stud drill-holes via protective porcelain insulating tubes, and supported along their length on nailed-down porcelain knob insulators.

“Where conductors entered a wiring device such as a lamp or switch, or were pulled into a wall, they were protected by flexible cloth insulating sleeving called loom. The first insulation was asphalt-saturated cotton cloth, then rubber became common.”