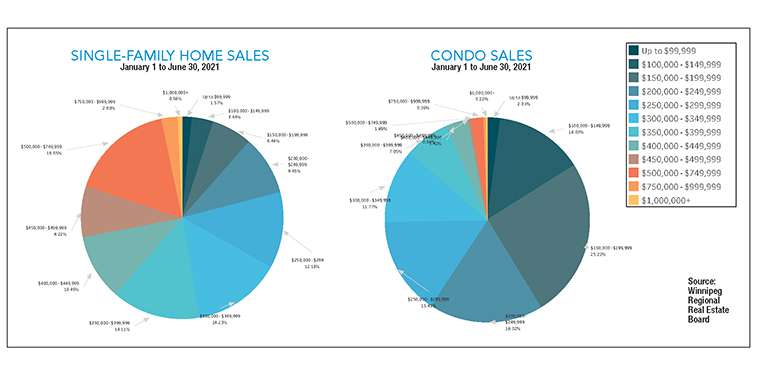 Condominiums proving to be a very affordable housing option

The first major development in 2021 is the remarkable record-setting condo sales activity. The Winnipeg Regional Real Estate Board (WRREB) has never before reached anywhere close to the sales numbers it is achieving so quickly. In the first six months of this year, there have been 1,376 sales, a 94% increase over the same period last year. Up until this year, the most condo sales in the first six months had been 963 in 2014.

The game-changer is not the number of condo listings coming on the market. This total has consistently been over 2,000 (with the exception of last year due to the pandemic economic shutdown in April and May). The real story is the conversion of those 2,000 listings to sales. Instead of a typical 40% turnover rate in the last 5 years, increased demand for condos has spurred this percentage upward to 66%.

Other MLS® areas worth noting when it comes to selling out their condo inventory are Canterbury Park, East St. Paul, Garden City, St. James, Crestview, West Charleswood south of Roblin Blvd., St. Vital south of Bishop Grandin between St. Mary’s Road and St. Anne’s Road, the RM of Ritchot, the lake country MLS® area which runs along the west side of Lake Winnipeg (e.g. Gimli), and Morden/Winkler.

In the month of June, Richmond West also experienced exceptionally strong demand with more sales than listings available at month end — 14 versus 11.

The busiest MLS® area by far for condo sales is Osborne Village at 126 sales. Tied for second at 60 sales are Crestview and River Park South, with Waverley West third at 56 sales. Downtown Winnipeg is close behind at 55 sales.

The pie charts above reinforce the point that condos are a very affordable alternative to the single-family home, especially for first-time buyers who enter the market without having any equity established through prior property ownership.

The average square footage for house sales was 1,369 sq. ft. while for condos it was 1,037. The average continuous days on market to sell a house was 23 while condos averaged 44 days.

Based on the unprecedented level of activity in the first half of this year there is no reason not to expect brisk sales to continue into the third quarter. Condos are proving to be a very good affordable housing option in our local real estate market.