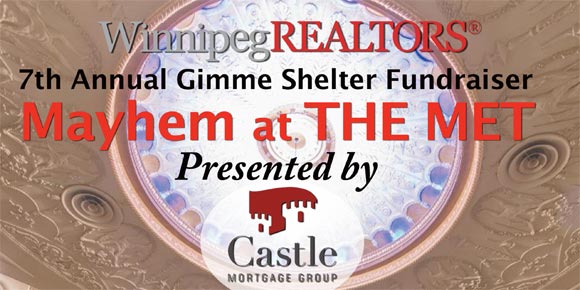 When the organizing committee of the WinnipegREALTORS®-sponsored Gimme Shelter fundraiser voted to move the event to The Met in 2016, it was a bold decision.

After a night characterized by strong attendance — ticket sales reached approximately 600, more than double the number sold for the 2015 event — REALTORS® from across, as well as outside, the province, united to ensure the success of the seventh annual edition of the fundraiser in support of the Manitoba Real Estate Association’s (MREA) Shelter Foundation.

Gimme Shelter chair Amber van den Broek said she was pleased with how the evening unfolded. “Everything turned out really well. People arrived early, and then they stayed late. Everyone was smiling and laughing, and there was a lot of energy and excitement. People danced, visited, enjoyed the musical acts, played games and enjoyed the escape room. Our goal was to have something for everyone, and I think we achieved that.”

It all wouldn’t have happened without the efforts of the volunteer committee, she added. Last September, more than 30 volunteers, including two from WinnipegREALTORS® and one from the MREA, started planning the event.

“It was a big-time commitment,” said van den Broek. “We met once a month for the first several months, then bi-weekly the last few months.

“Then, on the day of the event, the volunteers — we had an army of them — were there all day, and all night. I left around 10 p.m., and they were still all there, hard at work.”

Roger Burns, outgoing MREA Shelter Foundation chair, said the effort level of all the volunteers was impressive. “There’s no question that the venue was good, but the people (i.e., volunteers) were what made the difference. Everybody pulled their weight and worked hard from start to finish. Everyone at the Shelter Foundation greatly appreciates the efforts that the volunteers, and the support of Realtors from across Manitoba who support the event.”

Support for Gimme Shelter actually comes from outside the province, as well. Two former Winnipeg Realtors — Edmonton-based Rhonda Navratil and Calgary-based Ron Carriere — have made a point of attending (and volunteering at) the event for the last six years.

“We plan for it every year, and wouldn’t miss it,” said Carriere. “Coming back gives us the opportunity to support a great cause, and to get to know everyone again.”

Navratil said Gimme Shelter will always be a fixture on their calendars.

“Both Ron and I have family here, so coming back to attend Gimme Shelter allows us to visit them, and former colleagues. And we don’t just attend the event. We volunteer at the front desk on the way in, and we always donate a prize.

“This year, we were able to donate an autographed Adam Lowry Jets jersey, and were happy to do it. We still do a lot of business with Realtors from Winnipeg, so we still feel like we’re part of the community, and want to do what we can to help out.”

Volunteer Brianne O’Neill said all the hard work she and the other volunteers put in leading up to the event was worth it.

“Things went amazing, and it looked like people had a fantastic time,” she said. “I think it turned out exactly like we hoped it would. Everyone seemed to enjoy the music, dancing and games, and the food was good.

“We all worked hard, but we took our cue from Amber, who was so energetic.”

Burns said that high level of dedication is much-appreciated. “I applaud all our Realtors, particularly the volunteers who go above and beyond every year to put on a great event. The volunteer members make the events look like they run on autopilot. That’s a testament to all their hard work and dedication. They’re always a super fun, excited group of volunteers — we even had one come in from Gimli to help out this year.”

As far as the fundraising side of Gimme Shelter is concerned, van den Broek said things are looking promising. “The live auction raised $13,000 and we had a record 31 baskets up for auction in our Rainbow Auction, so I’m optimistic about the financial outcome,” she said.

“We had a great team. We were very organized, and there was never a stressful moment the day of the event. I want to put out a big thank-you to all our volunteers. We couldn’t have done it without them.”