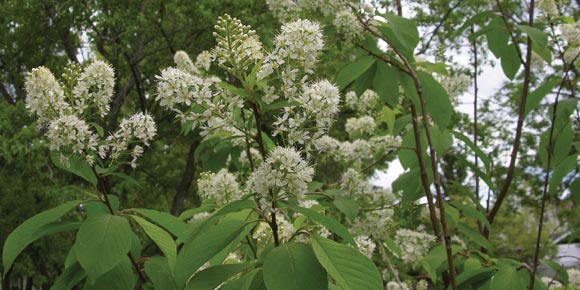 Black knot and suckers on chokecherries

Black knot is caused by the fungus, Apiosporina morbosa. It overwinters in knots on twigs and branches or in the infected wood immediately surrounding them. In the spring, the fungus produces spores in sacs contained within tiny fruiting bodies on the surface of the knots, which can infect other parts of the tree if conditions are right. Only succulent green twigs of the current season’s growth are susceptible to infection.

The fungus causes the plant to produce tumor-like growths – knots – that may become visible by the late summer of the year of infection but often are not noticed until the following spring. The knots will elongate several inches each year and eventually girdle affected twigs and branches, causing ugly gaping wounds along the infected branches.

A tree can live a long time with black knot, although it is unsightly, however once the infection invades the main stems of a tree, it is usually fatal.

Black knot affects prunus varieties, including cherries, plums, peaches, apricots and almonds. One of our challenges in Manitoba is that chokecherries and wild plums abound in the wild, where black knot is currently rampant.

Control is through pruning and it is important to prune at least 12 inches below each knot because the fungus grows beyond the edge of the knot itself. Sterilize your pruners in a solution of bleach (one part bleach, nine parts water) after each cut.

Fertilize the tree in May or June with a tree fertilizer such as 21-7-7 or even a balanced 20-20-20. This will help the tree ward off future infections.

Fungicides can offer significant protection against black knot, providing the greatest benefit if applied to new growth before rainy periods and once any infection has been pruned out, particularly when temperatures are greater than 13 degrees C.

Amur chokecherry (Prunus maackii), is black knot resistant, although it can become infected, too. It is much loved by Manitoba gardeners for its papery, glowing, cinnamon-coloured bark and its long, fragrant clusters of tiny white flowers that become glossy black cherries to beguile the robins in summer.  This is a good time to prune right now before the tree leafs out and while the temperatures are still low.

Amur chokecherry grows 30 feet tall with a spread of up to 25 feet and can be single or multi-stemmed, depending on your preference and pruning skills. It is nonsuckering, a boon for those who like to garden under the tree.

By the way, if you’re buying a suckering tree, check for sucker growth in the container it is being sold in. If there are suckers showing, leave it. Properly prepared trees have their suckers trimmed back and sealed with white latex paint before sale. If you have already purchased your tree with suckers, you can prevent later suckering by exposing the sucker to its base beneath the soil, cutting it back and sealing the wound. Don’t have white latex? Use nail polish.

Dorothy Dobbie is the publisher and founder of Manitoba Gardener magazine which is celebrating its 20th anniversary this year. Subscriptions are available at 204 940 2700 or by going to www.localgardener.net.