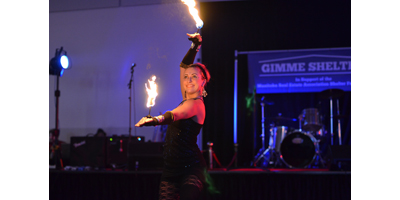 On one evening each year, REALTORS® come together in support of an event that’s near and dear to their collective hearts — the Gimme Shelter fundraising social.

In a nutshell, Gimme Shelter is an event staged by WinnipegREALTORS® in support of the Manitoba Real Estate Association’s (MREA) Shelter Foundation. During the event, a good portion of the province’s 1,700 to 1,800 REALTORS® convene to raise as much money as they can in one night.

That money — usually around $40,000 — is then donated to the Shelter Foundation, which in turn dispenses it to shelter-related organizations who turn the funds into shelter for folks who badly need a roof over their head.

“It’s an event we’re all passionate about,” said Roger Burns, MREA Shelter Foundation chair and member of WinnipegREALTORS® organizing committee for Gimme Shelter. “The great thing about it is that we’re not promoting ourselves, or the companies we work for — we’re promoting the REALTOR® image. All of our REALTORS® care, and want to do their best to support charitable organizations in Winnipeg.”

WinnipegREALTORS® chair and corporate fundraiser for the event, Suzanne Mariani, said the response from REALTORS® has been nothing short of amazing.

“I’m absolutely thrilled with how REALTORS® have been pulling together to work toward one goal, which is to give back to our city,” she said. “One of the most exciting things for me has been to see how so many new REALTORS® are jumping in to help. Their help, and the help of all the other REALTORS®, who give so generously of their time, is what’s allowed this event to become bigger and better every year.”

This year, Gimme Shelter will be held at Cowboys Roadhouse, part of Canad Inns Destination Centre at 1034 Elizabeth Rd. in Windsor Park. As usual, the evening — doors open at 5 p.m. — will feature auctions, a formal REALTORS® Got Talent competition, as well as various acts from REALTORS®, who simply want to come out and entertain their peers, and the public, who’s welcome to attend. Call 204-786-8854 for tickets ($35 each).

Mariani said many big names will be on hand at Gimme Shelter’s 2015 edition. “Our emcee is actually going to be former Winnipeg Blue Bomber offensive lineman (No. 60) Obby Khan,” she said. “He’s a great guy who’s going to be an absolutely amazing host. We will also have three celebrity judges: Manitoba Liberal Party leader Rana Bokhari, former city councillor (and federal Liberal Party candidate) Dan Vandal, and Glenn Hudson, former chief of Peguis First Nation. There will be seven acts competing for top prize, so it should a fun, and very interesting competition, to say the least.”

REALTOR® Amber van den Broek, another member of the committee (and entertainer with her entrancing belly dance/fire fusion act), said that the new facility figures to be the best yet.

“It’s not only in a great location, but Cowboys Roadhouse is bigger and better, so I think it’s going to make for a more well-organized event,” she said. “Outside, there’s a big parking lot, so there should be room for everyone — REALTORS® and public alike.”

The event will be professionally-run from top to bottom, added
Mariani.

“There’s going to be an amazing stage, a huge dance floor, an awesome sound system and lots of room to mingle,” she said. “There will be a glassed in VIP lounge for $1,000 contributors, and both the entertainment and auction prizes are going to be exceptional. All the REALTORS® acts will be amazing. Then there’s two REALTOR®-led bands.

“We will even have a signature Gimme Shelter drink (for $5) with proceeds going toward the Shelter Foundation,” she added.

Burns said that if the goal of the event is met — raise over $40,000 — it will have been accomplished through a total team effort.

“It’s just a bunch of REALTORS® working together to raise funds for a great cause, working collectively to raise money for worthy shelter-related organizations.

“To date, the event has raised over $200,000, and overall, the Shelter Foundation has raised over $500,000,” he added. “I’m looking forward to a great event that will raise even more money for a great cause.”