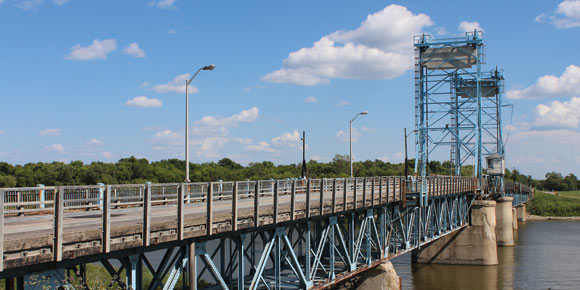 The historic landmarks of Selkirk, Manitoba

The federal government left an impact on Selkirk’ Manitoba’s urban landscape by funding the construction of two historic landmarks that still stand today.

For decades, the municipalities of Selkirk and St. Clements sought to build a permanent link across the Red River but finding the necessary funds proved elusive. That changed during the Depression after the federal government announced a national infrastructure program meant to put unemployed men back to work for brief periods.

An application for the Selkirk Bridge was submitted and in June 1934 the federal public works department approved a grant for $250,000 - the entire estimated cost of the project.

The bridge was designed by Arthur Taunton, who at the time was the assistant engineer in the Department of Public Works’ Winnipeg office. He also acted as the consulting engineer during its construction.

Supported by two concrete abutments and three concrete piers, the bridge’s superstructure consists of five fixed steel spans and a vertical lift span in the middle that rises to allow ships to pass under. Atop the bridge deck is a 20-foot-wide roadway with a sidewalk on the north side.

Work on the foundations began in February 1935 and in August the contract for the superstructure was awarded to Dominion Bridge of Winnipeg.

By spring 1936, the bridge was entering its final phase of construction when an unexpected controversy arose. It turned out that nobody wanted to take ownership of the completed bridge as it would have meant being responsible for the cost of its upkeep and maintenance.

The federal government said it had done its part by paying for the bridge’s design and construction, the province said it wasn’t responsible as the bridge did not connect to any highways, and the municipalities said that they didn’t have the money to look after it.

The federal department of public works announced in May 1936 that if it got stuck with owning the bridge it would charge tolls to cross it and put that money towards a maintenance fund. This angered locals to the point that they called on the town to reject the proposal and keep the ferry service that had served the municipalities for decades in place.

The controversy meant that the finished bridge stood unused, but with the middle span raised to accommodate boat traffic, for a full year.

In April 1937, the federal government offered a one-time payment of $6,000 to the municipalities if they would take the bridge off its hands. They accepted, and the bridge was officially opened on Monday, May 3, 1937. Due to the animosity created during the toll debate, there was no ceremony held and the mayor of Selkirk did not attend.

By the 1970s, the bridge’s age began to catch up with it and every few years it underwent a series of short-term repairs. Finally, in 1990, an official with the provincial highways department, who described the structure as being in a “disgraceful condition”, announced that the bridge would soon receive a major renovation.

The bridge closed for its $2.8 million repair job on January 6, 1992. The work included a new road deck, a new mechanical and electrical system for the lift span, and repairs to the concrete piers.

The Selkirk Bridge reopened on September 12, 1992 with a vintage car parade and street festival. Unlike its original opening fifty-five years earlier, the mayor of Selkirk was in attendance.

After a decade of incredible growth, the federal government was under pressure to improve its level of services in Selkirk. This included its post office, which for years had been run out of R. H. Gilhuly’s drug store on Eveline Street.

In 1907, the public works department approved the construction of a new, $30,000 federal building that would be home to numerous federal government offices, including fisheries, customs, an Indian agent, the RCMP and, of course, a post office.

A 48 x 76 foot site on Main Street at Manitoba Avenue was purchased and James Chisholm was hired to draw up the plans for the new building.

Chisholm was a popular Winnipeg architect. His projects included everything from houses to office buildings. Two of his better-known works are the Marlborough Hotel and Carnegie Library on William Avenue.

The architect didn’t stray too far from what a typical small-town, federal government office building of the era looked like. Constructed of red brick with limestone trim, it is in what is considered the Classical Revival style with its pronounced cornice and arched windows.

In 1957, the post office relocated to a new location further down Main Street and the old building sat vacant until the early 1960s when it was converted into a large rooming house. Poorly maintained, health inspectors shut it down for being insanitary in 1979 and the building was boarded up.

The Selkirk Community Arts Centre took over the old post office in 1984 and began a long, slow process of restoring it to its former glory. It is now home to a suite of offices, the Gwen Fox Art Gallery and a gift shop.

In 1990, the former Selkirk Post Office was designated a provincial heritage site.