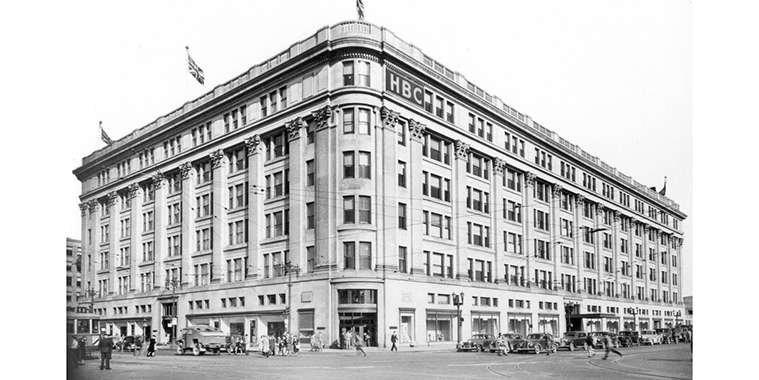 The Hudson’s Bay Company (HBC) department store, like the old Eaton’s, is one of the more iconic buildings in our city. Despite HBC closing the retail doors on this long-time downtown location, unlike with Eaton’s, every effort is being made to preserve this local architectural treasure.

As announced in Budget 2021 — Protecting Manitobans, Advancing Manitoba — the Manitoba government has established the $25-million The Bay Building Fund to support projects that will restore, preserve or maintain the heritage elements of the historic downtown HBC building, as was announced by Sport, Culture and Heritage Minister Cathy Cox and Municipal Relations Minister Derek Johnson.

“Our government is proud to have made record investments toward the conservation and long-term sustainability of Manitoba’s recognized heritage sites so that future generations can learn from and celebrate our province’s rich and diverse history,” Cox said. “Manitobans have many memories attached to the HBC building, but it was more than just a retail location, it is part of our province’s heritage and the social fabric of downtown Winnipeg. We are pleased to offer this significant commitment and we look forward to the inspiration of private enterprise to unlock the potential that awaits for the redevelopment of this landmark building and vibrant neighbourhood.”

The history of this iconic building is long standing. Hudson’s Bay Company was founded in 1670, through a Royal Charter granted to ‘The Governor and Company of Adventurers of England trading into the Hudson Bay’, and is the oldest commercial enterprise in North America. Its first store, built in 1881, had been located at the corner of Main Street and York Avenue and was vacated when the current building was completed.

Originally opened in 1926, it was built in subdued Neo-Classical/Classical Revival style, which became the Hudson’s Bay Company’s corporate style for buildings thereafter. The building has seen many changes over the last century and was granted protected heritage status by the City of Winnipeg in 2019. With a massive building footprint, covering more than 500,000 square feet and taking up nearly an entire city block, there are significant economic and social opportunities but also many redevelopment challenges.

“We are very grateful to the province for its investment in maintaining the heritage elements of the Winnipeg building,” said Ian Putnam, president and CEO of HBC Properties and Investments. “Winnipeg has played a pivotal role in the history of HBC, and it remains an important market for Hudson’s Bay. As we continue to be a shopping destination for Winnipeggers at Polo Park and St. Vital, we are excited to work with the province, city and other partners to find opportunities for this landmark building.”

Manitoba’s $25-million The Bay Building Fund is being held in trust by The Winnipeg Foundation. Eligible projects can be completed over a 10-year period until March 31, 2031, and include:

• Capital repairs, such as structural repair and building stabilization;

• Creation and installation of exhibits in the large display windows on the main floor or another location within the building depicting the history of The Bay Building or HBC.

If the entire $25 million is not utilized by 2031, any remaining amount will be transferred to the province’s heritage resources endowment fund and to support other designated provincial and municipal heritage buildings.

“Our government recognizes the importance of preserving our past and investing in the future. A healthy and vibrant downtown is crucial for sustained economic growth for the city of Winnipeg and building a more prosperous Manitoba,” said Johnson.

“The iconic HBC building is a major structure in the centre of various downtown redevelopment projects, including the new Inuit Art Centre, True North Square, the University of Winnipeg, Memorial Park and the Manitoba Legislative Building,” he added. “Redevelopment of the HBC building would be a positive addition to those projects and ensure the continued vitality of downtown Winnipeg, where businesses will benefit from our government’s phase out of the Education Property Tax starting with a 10 per cent reduction for commercial properties in 2021. We encourage other levels of government to join us and invest in this historical preservation and civic development opportunity in the heart of our capital city.”

Budget 2021 continues to support municipalities with one of the most generous municipal funding programs in the country, Johnson noted. With this commitment to the Bay building, this year’s budget commits almost $300 million to Winnipeg operating, infrastructure and service agreement programming.

Good news to anyone who has fond memories of once shopping in this great building and having lunch in the much missed Paddlewheel Restaurant.