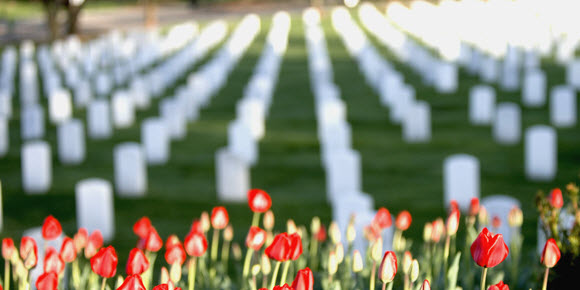 During the week leading up to Remembrance Day on November 11, school children will be touring Brookside Military Cemetery from November 6 to 10, while a free public tour will be held on November 5, which begins at 11 a.m. (Advance registration is required; call 204-986-4348.)

The Field of Honour at the cemetery is the burial place of more than 10,000 war dead, veterans, peacekeepers, merchant marines, and military service men and women from the First and Second World Wars, as well as the Korean War, and other wars and battles. The Field of Honour also contains some very significant military monuments, including the only Commonwealth War Graves Commission “Stone of Remembrance” in all of the Americas.

“Many people don’t realize the significance of Brookside Ceremony in terms of Manitoba’s war history,” said Jane Saxby, cemeteries administrator. “Remembrance Day is a day to remember, and we invite the public to join us for tours and to learn about our history.”

It’s often difficult to relate to children the significance of the wartime experiences and sacrifices of Canadian men and women. But one way may be to mention two of the more famous individuals interred in the cemetery — Sergeant Tommy Prince, Manitoba’s most decorated Indigenous war veteran, and Major Harry Colebourn, the First World War soldier, who owned the bear cub that inspired Winnie the Pooh, a character beloved by children.

On August 24, 1914, Colebourn (1887-1947), a veterinary officer with the 34th Fort Garry Horse Regiment of Manitoba, while en route from Winnipeg to Valcartier, Quebec, noticed a man on the station platform at White River, Ontario, with a black bear cub tied to a bench. The man told Colebourn that he was a trapper and had shot and killed the cub’s mother. Colebourn was able to purchase the cub from the man for $20.

In December 1914, Colebourn and the 2nd Brigade were preparing for leave for the front in France. While passing through London, Colebourn decided that the battlefront was no place for a bear and on December 14 asked the London Zoo to take care of the cub he named Winnipeg. It would be four years before Colebourn would again see his bear.

In 1919, he gave the bear to the zoo where she was visited by many, including author A.A. Milne and his son Christopher.

Colebourn’s diaries indicate he had every intention of bringing her back to Canada, but changed his mind when Winnie became a major attraction at the London Zoo. The zoo staff are said to have frequently commented on her playful disposition and friendly nature.

The zoo dedicated a plaque acknowledging Colebourn’s donation and numerous newspaper stories were written about Winnie and her Canadian owner.

In one famous photograph at the London Zoo, Christopher Milne is seen feeding the bear a spoonful of condensed milk, said to be the bear’s favourite treat. But for the purposes of his stories, Milne decided that honey was a better snack and Winnie-the-Pooh couldn’t agree more: “Isn’t it funny/How a bear likes honey/Buzz! Buzz! Buzz!/I wonder why he does.”

In 1992, Fred Colebourn and the great-grandchildren of Lt. Harry Colebourn unveiled the Winnie-the-Bear sculpture by artist William Epp located on the grounds of the Assiniboine Park Zoo. In 1999, a bronze statue of Colebourn and Winnie by Epp was unveiled at the London Zoo by men from the 34th Fort Garry Horse.

Not surprisingly, Pooh is acknowledged by the Disney people (they now own rights to the character) as being one of their most-loved and well-known characters, second only to Mickey Mouse — not bad for a bear originally named after a prairie city.

Prince, an Ojibway, was born in Petersfield, Manitoba, on October 25, 1915. He received 11 medals during the Second World War and the Korean War. He was originally assigned to the Royal Canadian Engineers, but subsequently enrolled in parachute school, and later volunteered for the 1st Canadian Special Service Battalion in mid-1942. He then joined with a Canadian-American commando unit that became famous for its exploits during the war. Prince and the other 696 Canadians were posted to Helena, Montana, for training with 1,000 Americans to develop specialized combat skills.

The first assignment of the 1st Special Service Force was at Kiska, Alaska, but the Japanese had already abandoned the island, so the unit was sent to Italy in December 1943. South of Cassino, the unit mounted a daring mission, scaling a cliff in the dark and overrunning a key German defensive position on Camino Ridge. At Anzio, the unit fought for 99 days without relief. The Germans referred to the unit as the Devils’ Brigade — a name that stuck — as its members left the unit’s insignia on dead Germans with the message, “The worst is yet to come.”

Prince was noted for his lone reconnaissance missions, spending days and nights behind enemy lines to gather intelligence. In one famous action at Anzio, Prince volunteered to run a communications line out to an abandoned farmhouse that was only 200 metres from a German artillery position. Using the farmhouse as an observation post, he reported on enemy movements for three days. When the communication line was cut by a shell, he disguised himself as a peasant and blazonly fixed the wire as the Germans watched.

At Buckingham Palace, King George VI presented Prince with the Military Medal and the American Silver Cross for gallantry.

During the Korean War, Prince served with the Princess Patricia’s Canadian Light Infantry and lead many “snatch patrols” into enemy territory. One mission resulted in the capture of two machine gun positions. It was at Kopyong on April 22, 1951, that the heavily-outnumbered Pats held off numerous Chinese attacks on their position on Hill 677. Along with his comrades, Prince received the United States Presidential Unit Citation for their heroism.

Civilian life in Winnipeg was not too kind to Prince. His final years were lived in poverty and he died at Deer Lodge Hospital at age 62 in 1977. But he was never forgotten by his comrades and the Indigenous community, who successfully fought their own battles to gain recognition for the Canadian hero. As a result Prince is commemorated in a mural, memorials and a school, among numerous other tributes.

Using Prince and Colebourn as examples, children can get at least some understanding of their well-earned status in the history of the province, as well as the sacrifices made by so many Manitobans.