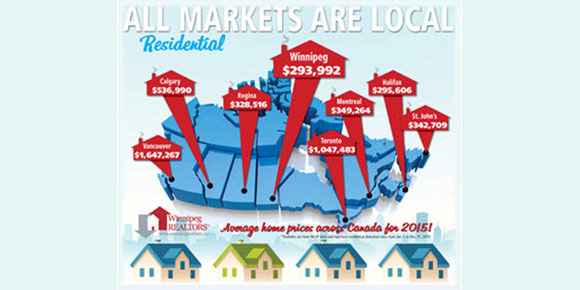 Outgoing WinnipegREALTORS® president David MacKenzie described the 2015 housing market as “steady,” and a “good year as it turned out.”

In fact, 2015 established a new MLS® dollar volume record of $3.5 billion, and had the third best sales total in the 113- year history of the association.

“It is really quite remarkable how close our year-end sales have been in the last few years,” he said, “including our highest sales year of 2007. They all tended to hover just above or close to the 13,000 unit sales level.

“Following on the heels of a record sales month for November,” he explained, “December sales of 642 were up four per cent from the previous December.

“They were the third highest for this month,” he added, “and were only behind the best sales years by a very modest amount.”

According to Squire, sales and prices were consistent throughout last year, but listings were another matter.

“With an increase in listings and sales remaining consistent,” said Squire, “the market’s inventory has been rising month over month.

“This is borne out by having over five months of inventory available going into 2016.”

MacKenzie said the rise in inventory presents an opportunity for home buyers.

“Buyers are in a great position to take advantage of the current market,” he said, “which is providing a large number and array of properties for sale as well as many properties that remain among the most affordable in Canada.

“Sellers should also take heart knowing that WinnipegREALTORS® still enjoyed one of its best sales years on record.

“They need to be aware, however, that more competition for those sales creates more downward pressure on prices since the supply is outstripping demand,” he added.

Squire said an indication of stiffer competition between sellers is the number of single-family homes that sold below list price last year.

“Still, of all the single-family or residential-detached listings that sold in 2015,” he added, “on average they received 98 per cent of the total list price.”

While residential-detached home sales were a high performer in 2015, with sales and dollar volume up three per cent and five per cent, respectively, condominium sales lagged.

Squire said it was an unexpected poor first quarter that began the trend with sales off 20 per cent when compared to the same period in 2014.

“By the end of the year, this deficit was cut in half,” he said, “but nonetheless, there was a 10 per cent decrease in condo sales compared to 2014.”

Residential-detached sales represented nearly three out of every four property sales on MLS® in 2015. The share for condos was 12.5 per cent.

MacKenzie said the housing market in 2016 will be helped by a relatively well performing economy.

The province’s GDP is expected to increase by 2.3 per cent this year, after rising by only two per cent in 2015.

In addition, the employment rate for the province is projected to grow by one per cent in 2016.

“A recent survey by CIBC also shows Manitobans are the most confident about their financial situation, so this is another positive indicator that buyers will continue to take advantage of an excellent selection of properties for sale at some of the most affordable prices in the country,” he added.