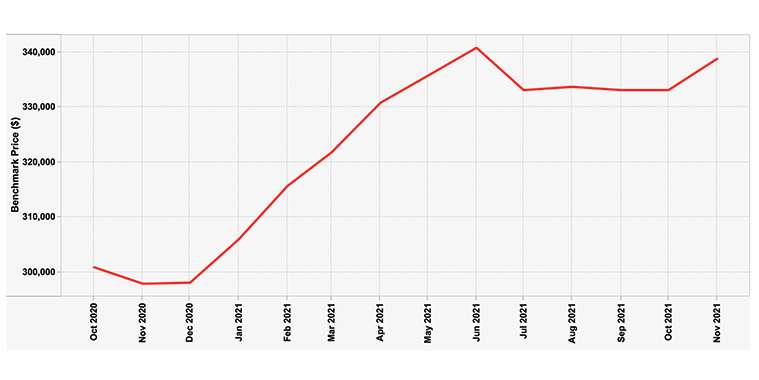 As the year winds down, let’s take a cross-Canada tour on MLS® HPI- an index developed by the Canadian Real Estate Association (CREA) in partnership with Altus Group to offer Canadians the most advanced and accurate tool to gauge home price levels and trends. The MLS® HPI is based on the value home buyers assign to various housing attributes, which evolve gradually over time.

Each month, the MLS® HPI uses more than 15 years of MLS® System data and sophisticated statistical models to define a “typical” home based on the features of homes that have been bought and sold. These benchmark homes are tracked across Canadian neighbourhoods and different types of houses. REALTORS® have direct access to all of the more detailed neighbourhood breakdowns as
defined by local real estate boards through the MLS® areas they have created and track every month.

Let’s start on the west coast and move east to capture some of the most mentioned housing markets in the country. Winnipeg was noted in the November market release and will be highlighted again here. It will become abundantly clear while reviewing some of these benchmark prices — attributed to the most typical single-family home in these markets — that prices vary considerably, as do the increases we have experienced in 2021.

All prices and increases are based on looking at the benchmark prices at the end of 2020 and then examined again after the first 11 months of 2021 by checking the index at December 1, 2021. They are not seasonally adjusted.

Ontario takes house prices to a much higher level, much like what we are seeing in B.C. Let’s look at Hamilton-Burlington first since this city is fresh in everyone’s mind after hosting a glorious Grey Cup game (with the Winnipeg Blue Bombers prevailing in overtime against the Hamilton Tiger-Cats in a very hard-fought battle to give them two consecutive Grey Cup victories).

In Quebec, Quebec City is remarkably close to Winnipeg at the beginning and end of the 11-month period in 2021. Its present benchmark price is just below Winnipeg’s at $334,700 while starting off a few thousand dollars less at $295,200. Not surprisingly, the percentage increase is almost identical at 13%.

Montreal at one time — going back a number of years — was much more aligned with Winnipeg and Quebec City in its house price level, but that’s no longer the case. 2021 exemplifies its considerably more elevated status with a 22% rise to $578,800.

CREA’s MLS® HPI has yet to capture the Halifax-Dartmouth market, but from looking at recent housing reports, they indicate rapid price increases this year in the 25% range and average single-family homes in the high $400s to close to half a million dollars.

The aggregate benchmark single-family home price for Canada — based on all the markets CREA’S MLS® HPI encompasses — is $858,100, up 25.7% from $682,500 in December 2020. These numbers clearly reveal how all markets are local and how the weighting is predisposed to a multitude of expensive home sales in populous provinces such as Ontario and B.C.