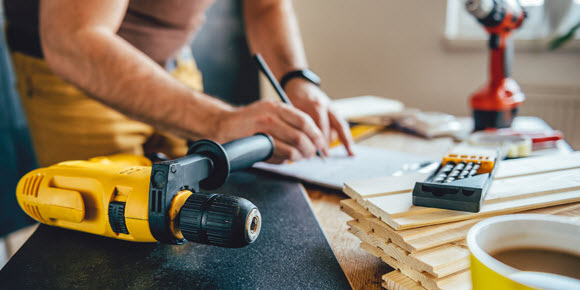 A recent CIBC home renovation poll revealed that an increasing number of Canadian homeowners intended to renovate their home in 2017.

Approximately 48 per cent of homeowners intended to perform upgrades to their home in 2017, which is up from 2016, when 37 per cent of respondents indicated they would undertake renovations.

The poll indicated that homeowners will spend $11,800 on average to address “wear and tear” and basic home maintenance, such as painting, flooring and replacing appliances.

Perhaps the most interesting aspect of the poll is where homeowners planned to carry out those renovations.

According to the poll, 48 per cent of homeowners intended to spend their hard-earned dollars on basic maintenance.

Meanwhile, landscaping was the renovation of choice for 38 per cent of Canadian homeowners, while 31 per cent of homeowners said they would be giving their bathroom a makeover.

Thankfully, the poll went into greater detail about the reasons behind the renovations.

The main reason to renovate was to address wear and tear on a home, with almost one-third of respondents indicating that they “needed” to do repairs.

“Maintenance and upkeep of a home is a big part of homeownership,” he says. “It’s essential that homeowners maintain and improve their homes on a regular basis.

“Many owners will say, ‘Why should I fix it if it’s not broken?’

“If you want to keep your home looking good and working well, you should fix it whether it’s broken, or not.”

Longtime renovator Grant Sakiyama agreed, saying that keeping your home up to modern standards — and in good working condition — always pays off.

“It’s very important to continually perform renovations to your home, particularly to increase its value in the resale market. Taking care of the little details makes a big difference.

“If you keep your home up to modern standards, it will have strong resale value,” he added.

Sonnichsen said that while chipping away at renos on a yearly basis can be a bit of a pain, that discomfort will save stress and lead to stronger resale value when the time comes to sell.

“Not doing renovations can cost you money,” he said.

“For example, a homeowner might look at a project, thinking it will cost $2,500. Then, a renovator will cost out the project at $4,500. The homeowner then might decide not to do the renovation.”

That would be a mistake, warned Sonnichsen.

“Say you put your home up for sale without doing that renovation. A buyer might then come in and determine that the renovation, in their opinion, will cost $8,000, because they saw all the things that went wrong with a renovation on TV. They will then attempt to deduct that $8,000 from the purchase price of the home. By doing timely, regular renovations, you leave less for buyers to interpret.”

In turn, that will reduce the objections of prospective buyers, making it easier to sell the home.

“Not only will you not have as much to do when the time comes to sell, but your home will have a fair and current market value, not an adjusted market value,” said Sonnichsen.

In other words, buyers won’t be able to tour a renovation-deficient home and make deductions.

“They won’t be able to make downward adjustments on your home by comparing it to homes where key renovations have been done. You’ll have a contemporary property that you can enjoy while you live in it, and that buyers will want to purchase because it’s well-kept, and looks good in every area.”

“Continually doing upgrades makes a home more functional and contemporary, and adds value. That value will show up when you decide to sell,” concluded Sakiyama.