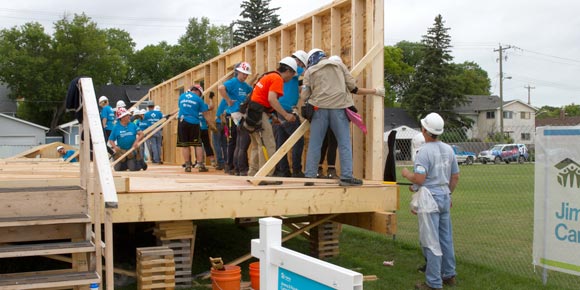 Homeownership matters and Habitat for Humanity Manitoba is all about making the home ownership dream possible for many Winnipeggers who otherwise would not have the opportunity to own a home.

Many studies over the years have demonstrated that homeownership provides stability. In Habitat’s case, a study completed by Canada Mortgage and Housing Corp. (CHMC) wherein they extensively interviewed 1,000 Habitat homeowners from coast to coast who had owned their homes for between 3 and 20 years, confirmed many positive trends that we had noticed in Winnipeg among our ownership group.

Consistently, within a short time after moving into their home, a marked improvement in school performance was observed. The families were healthier, missing fewer days from work or school. The families were less stressed generally and about finances in particular. They were less likely to require social assistance or food banks. They became more involved in school and community activities.

Another study following the CMHC piece, and building on it, was conducted by the Boston Consulting Group (BCG). They created a large control group of families in similar economic circumstances but not in the Habitat program. They found that the Habitat kids were much more likely to finish high school and obtain some level of post-secondary education. The Habitat parents were more likely to go back to school and upgrade their skills, resulting in better paying jobs. BCG determined that every family purchasing a home from Habitat will provide $175,000 in community benefit over 25 years.

Habitat for Humanity Manitoba hosted the Jimmy and Rosalyn Carter Work Project in Winnipeg last July. A concern we had when agreeing to host this massive event was going from ‘Carter high’ in 2017 to ‘Carter hangover’ in 2018. Would there be donor fatigue? Volunteer lassitude? Staff burnout? I am happy to report that none of those worries came to pass.

We are slated to start the same number of homes this year as last: 25 units. There are two initiatives in 2018 that I particularly wish to bring to your attention.

We are building a four-unit townhouse and a single family home on Logan Avenue, west of Keewatin, all of which will be Net Zero.

As you might imagine, the design, planning and construction of these units is not a simple task. We are fortunate and delighted to be working closely with Qualico to construct these homes for sale to partner families. Sycamore Energy and Manitoba Hydro are also partners in the project. Eliminating energy costs will significantly improve cash flow and quality of life for the family and will allow them to pay down their mortgage more rapidly.

To our knowledge, this is the largest grouping of Net Zero homes built in Manitoba in any price range.

Staying with an environmental theme, the two ReStore outlets in Winnipeg, located at 60 Archibald Street and at the corner of Ellice and Wall, diverted more than 3,000,000 pounds of materials from the landfill site in 2017.

This summer we will be opening our third Winnipeg store at 1565 Inkster, between Sheppard and Mandalay. It is a standalone 12,000 square foot building with plenty of parking, which should quickly bring us to more than 4,000,000 pounds of materials diverted annually.

You can help us get to that magical figure by dropping off new or gently used items at either the Archibald or Ellice locations or calling 204-233-5160 ext. 220 to arrange for a pickup. You can find a list of acceptable items online at https://www.habitat.mb.ca/restore-donations-items.cfm

Profits from the ReStore are used to offset administration and overhead costs, thus allowing cash donations to be used in our build program.

Sandy Hopkins is the Chief Executive Officer for Habitat for Humanity Manitoba.