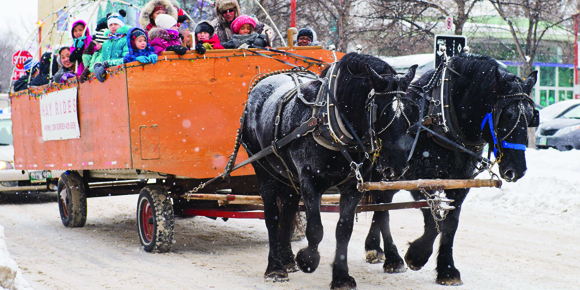 On January 30, Economic Development Winnipeg and the City of Winnipeg announced that our city is now an official member of the World Winter Cities Association for Mayors.

Talk about stating the obvious.

After all, Winnipeg effortlessly meets WWCAM criteria for being a winter city. First off, the city routinely faces harsh winter climatic conditions, including heavy snowfalls and cold temperatures (both a ridiculously regular occurrence this winter).

an average temperature of zero Celsius or below during the city’s coldest month.

As if to celebrate the city’s newly-minted World Winter City designation, approximately 19,000 Winnipeggers descended on The Forks to enjoy the Red River

Mutual Trail during the Great Skate on Sunday, February 5.

“We’re starting to see (attendance) numbers in the winter months as big as we see in July,” he said. “I think Winnipeggers are reclaiming winter. Twenty years ago, we would have had zero people out at The Forks on a cold winter day. That’s no longer the case.”

Jordan said though more focus has been put on marketing The Forks as a winter destination in recent years, the Red River Mutual Trail is the main attraction.

“It all starts with the Trail — it’s the canvas from which everything else is painted on. Every year, the Trail is anywhere from three to 10 kilometres long, and it draws all kinds of people out here. From there, we just apply layers of different attractions.”

One of those attractions — warming huts that line the Trail —has also sparked winter attendance at The Forks.

“Designing warming huts for the Trail is now an international competition,” said Jordan. “The designs have been amazing. Not surprisingly, people want to come out and see the architecture, so they come out, skate the Trail and stop to look at the different designs (such as 2017 designs Greetings From Bubble Beach, The Carbuncle Sauna, Ice Lantern, Open Border, Stackhouse and On the Rails).”

Add in a recently remodelled food court, and you have all the ingredients in place to create a winter mecca.

“We’re seeing a real cross-section of people. We’re definitely seeing more young people (i.e., Millennials) hanging out in the food hall after being outdoors, and we’re also seeing increasing numbers of new Canadians who’ve never experienced winter,” he said, adding that retailers’ now make as much money in February as they do in July.

Jordan added it’s been interesting to observe those newcomers as they attempt to acclimatize to their wintery surroundings.

“They’re out their trying their hand at skating, which is fun to watch,” he said. “They’re totally gravitating to the climate. It’s been wonderful to watch them seeing winter for the first time, realizing just how beautiful it is. Lots of young families are coming out, too.”

Not surprisingly, the City of Winnipeg is now an enthusiastic booster of The Forks.

“I think they’ve realized we’re the real deal, and are an attraction that makes the city so different. The Forks has always been a meeting place (dating back some 6,000 years, according to archaeological records), and is an area that makes us different as a city. It’s exciting that we’re really starting to have an impact.”

While The Forks has become the hub for winter activity in Winnipeg, the city is also known for winter attractions such as Journey to Churchill (Assiniboine Park Zoo), Fort Whyte Alive, Festival du Voyageur, and its myriad winter festivals.