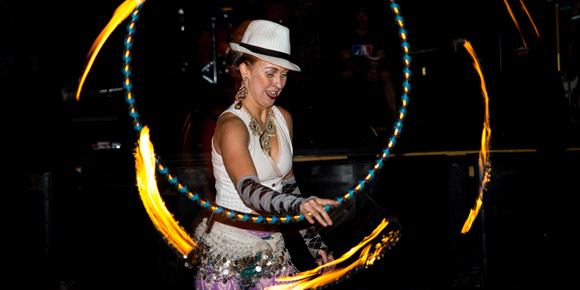 This year, expect Gimme Shelter to be characterized by mayhem. Or, more precisely, some well-choreographed Mayhem At The Met when REALTORS® from across Manitoba come together on March 15 to raise funds in support of the Manitoba Real Estate Association’s (MREA) Shelter Foundation.

While this is the seventh edition of the event, it will be the first held at the iconic Met. Gimme Shelter 2016 chair Amber van den Broek said all systems are go for the big night.

“It’s going to be a great event,” she said. “Everyone’s excited, the energy surrounding the event is great, and the community has really stepped up in terms of prize donations and sponsorships. This year has seen us gain the most support ever for our different levels of sponsorship. Our title sponsor is Castle Mortgage Group, with presenting sponsors being RE/MAX executives realty, RE/MAX professionals, and Qualico. We also have five friend sponsors, so we’re very excited.”

Van den Broek said The Met, which can hold 1,000 people, promises to be a great venue. “It’s a heritage building with lots of space, which is going to allow us to spread out different activities such as games, a casino table and three different food stations. And to top things off, there’s a great stage that’s set up specifically for bands and entertainment. There will also be lots of parking, with five to six parkades in walking distance to The Met — and no Jets game, or concert, that night.”

In short, The Met’s entertainment-friendly set-up has allowed event organizers to create an event that will be dynamic and delightfully eclectic.

“As far as entertainment is concerned, there will be a 10-piece brass band, an opera singer and the opening act will be a local acoustic guitarist — it will be a wonderful showcase of local talent,” said van den Broek. “There will also be a live auction with 15 or more big prizes, a photo booth, massage by donation, whiskey tasting and karaoke to cap off the evening. There will be a little bit of everything for everyone – you can take part in activities, mix and mingle at cocktail tables, or just sit down and relax.”

“The Met is a great, multi-faceted venue, and everyone is excited about holding Gimme Shelter there,” he said. “Ticket sales from previous years have already been exceeded, and support from the industry has been phenomenal.There are so many prizes, just tons of stuff to bid on. It’s clearly going to be an excellent event.”

It’s an event in which Manitoba Realtors unite to raise funds for a cause that’s close to their hearts, said Burns.

“Shelter is a human right, not a privilege. On the night of Gimme Shelter, our focus as Realtors is on helping the underprivileged. Everyone is looking forward to being able to help charities in whatever way they can.”

“We’re so proud of Manitoba Realtors in terms of what they contribute to the community,” added Burns. “They’re involved in many outreach initiatives, and Gimme Shelter is an important part of that outreach.”

An important aspect is that funds raised from the event are given to organizations in the most need.

“The MREA Shelter Foundation deals with what the largest demand is from one year to the next, so we don’t always deal with the same groups,” he said. “There are so many groups that need help; we do our best to help those in the most dire need from year to year.”

WinnipegREALTORS® president Stewart Elston said his organization is pleased to combine with MREA to stage such a meaningful event.

“I think I speak for all our 1,850 members when I say we’re proud to put on such a worthwhile event which raises thousands of dollars for needy shelters in our city,” he said.