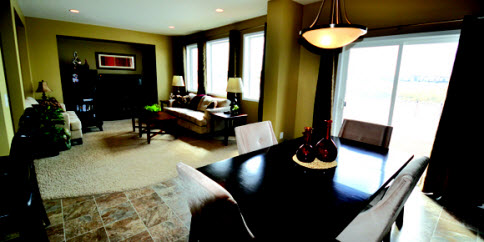 Sometimes staging isn’t about what you have done that resonates the most with potential buyers, but what you refrain from doing. In staging a home, your biggest asset is the imagination of prospective buyers.

Whether you realize it, sometimes the most important decisions you make are the ones that require you to do nothing at all. Staging a home is no exception. There is evidence to suggest that a properly staged home can sell for more money and in a shorter period.

Sometimes the most effectively staged homes are founded on the things you didn’t do. Remember, it’s just as import to appeal to prospective buyers, as it is not to scare them away. The trick is to eliminate the mistakes so that the highlights shine even brighter.

There is a right and a wrong way to stage a home. Even sellers must be aware of when they infringe on a home’s best features — or lack thereof — by incorporating too much. It’s a gray area, but you need to be able to differentiate between a living space that is staged well and one that simply has too much going on. If you are of the mind that you are somewhere in between, err on the side of too little.

Sellers must be careful as there comes a point when it might be counterproductive. That said, there are at least two crucial reasons for limiting the amount of staging you do: spatial awareness and visual representation.

For starters, staging a home is meant to enhance its features, and its size is no exception. The more things you put in a room, the smaller it becomes, reducing the amount of usable square footage.

Of particular importance, however, is the visual representation you are trying to establish. Stagers are advised to make prospective buyers feel at home. Provide them with a space that they can picture themselves living in, but don’t go as far as painting the whole picture.

Stage a room just enough for them to get an idea of what it would look like if they lived there. The second you convolute their vision with an over-staged home, you might have already lost them.

Whether it’s human intuition or pure instinct, far too many people feel obligated to relegate the backs of their furniture to open wall space. Although some circumstances call for the strategic placement of items up against a wall, it is by no means required. Instead, your main concern should focus on the most conventional setup your layout permits — without sacrificing aesthetics, of course. Setting up rooms in a way that lend themselves to a conversational manner.

Again, staging a home is all about presenting prospective buyers with a blank canvas that they can work with. You don’t want to show them too much, as to prevent them from envisioning their own family living there, but you do want to give them a catalyst to spark their imagination.

The little things do matter. If you haven’t hired a professional stager, go out and purchase small items to complement each piece of furniture. Done correctly, the little additions can go a long way in distinguishing the home from the competition. However, keep it neutral, as you want to appeal to the largest audience possible.

If you haven’t noticed already, there is a reoccurring theme that has become synonymous with the most successful real estate stagers: prospective buyers must unequivocally be able to picture themselves living in the respective property.

Therefore, I recommend leaving some rooms untouched — clean, of course, but untouched. In fact, the only rooms you should stage are the kitchen, living room, any bathrooms and the master bedroom.

Don’t bother staging guest rooms or offices, as it detracts from the blank canvas theory discussed. Leaving a room empty will help them envision their own belongings occupying the space.

You must remove yourself from the equation. In fact, leaving remnants of the previous family behind will go a long way toward sabotaging your efforts to sell. Even personal photos, for that matter, can have a larger impact than you might think. Get rid of anything that might suggest the home belonged to someone else.

Whether you realize it, sometimes the most important decisions you make are the ones that require you to do nothing at all.