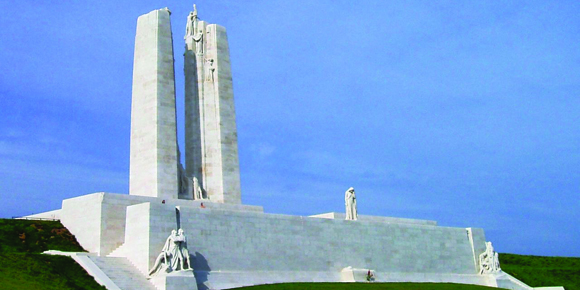 “There it lay, facing Canadian lines — a low, seven-mile escarpment of sullen grey, rising softly from the plain below,” wrote author Pierre Berton in his book Vimy when describing what confronted Canadian troops on Easter Monday, April 9, 1917, “rising softly from the plain below, a monotonous spine of mud, churned into a froth of shellfire, devoid of grass or foliage, lacking colour or detail, every inch of its slippery surface pitted or pulverized by two years of constant pounding. At first glance it didn’t seem very imposing, but those who knew its history and looked ahead to that moment when they must plough forward ... toward that ragged crest aflame with gunfire, it took on an aura both dark and sinister.”

“Out of the mist,” wrote the diarist for the 2nd Canadian Mounted Rifles, “exploded a curtain of fire from 983 guns and mortars.” At 5:30 a.m. on Easter Monday 1917, attacking battalions from four Canadian divisions crept forward behind this wall of flame and smoke up the gentle slope leading to the “coveted Vimy Ridge.”

Shells from 840 guns burst along a 6.4-kilometre front as far as the eye could see. The first artillery barrage lifted and 15,000 infantry pushed forward through sections of uncut barbed wire, over ground churned up beyond recognition. Close on their heels swept the stretcher bearers searching for the wounded.

The battle 99 years ago, “witnessed the birth of a nation,” according to Brig-Gen. Alexander Ross, who commanded a battalion during the battle.

Our soldiers who took on the “dark and sinister” ridge were said to have entered the battle as colonials, but emerged with a new sense of nationhood, succeeding when so many others had failed. During the years of bitter fighting since the start of the war, tens of thousands of French and British troops perished at the approaches to 135-metre-high Vimy Ridge.

Using new and imaginative tactics, a strategy emerged that within three days allowing Canadian soldiers to accomplish what others had failed to do in three years. In fact, by mid-day April 9, three of the four Canadian divisions engaged in the battle reached their objectives.

The difference between Canadian and British troops, who were used to a rigid class and command structure, was that the Canadians were flexible in their tactics and they were well-trained, well-led and driven by a commitment to learning, according to Brig.-Gen. William Griesbach, who was with the Ist Brigade at Vimy.

Clear objectives were laid out and designated by black, red, blue and brown lines. Everyone know at a specific time in the battle were they had to be. “Chaps, you shall go over exactly like a railroad train, on time, or you shall be annihilated,” warned Canadian Corps commander Sir Julian Byng.

Intelligence, aerial photograph reconnaissance and technological developments for locating artillery pieces were perfected by the Canadian artillery commanders, which were so effective that nearly 85 per cent of the enemy’s guns were destroyed before the attack.

Many of the tactics had been tried piecemeal by other armies, but it was the Canadians under Byng who combined past lessons into a overall strategy.

Sir Arthur Currie, the second-in-command during the attack (he made a report to Byng of new tactics that should be employed), was typical of the Canadians who fought in the war — he had been a school teacher and a real estate agent. He had no combat experience other than serving as a “Saturday Soldier” in the Canadian militia. The men who fought under him were, for the most part, young men in their late-teens or early-20s.

Canadian gunners perfected the use of a “creeping barrage” that went before the troops at 100-metre intervals every three minutes, keeping the German troops off guard as the Canadians went forward.

In addition, each and every soldier knew their objective and had maps with their objectives laid out, a clear departure the British practice of reserving battle plans for officers. Currie made this innovation so that the death of an officer would not impede the advance by leaving the troops rudderless on the battlefield. Even a lowly private would be able to take over the charge if necessary.

Furthermore, tunnelling companies excavated or extended11 main subways to protect men from enemy bombardment. At the right moment, they emerged from the tunnels — closer to the creeping barrage then those who came from the forward trenches — to overwhelm German dugouts.

On April 12, the last day of the historic battle, Brig.-Gen. Edward Hilliam, an Alberta rancher, would lead his men on ward to take the hill know to the troops as “the Pimple,” the last enemy stronghold. His report following the battle was signed, Lord Pimple. In a war where success was measured by mere metres, the Canadians had advanced a staggering 4,095 metres — the greatest Allied advance to that point.

“I am glad to say that I was through it, as it will be one of the biggest things in Canadian history,” wrote Medical officer Harold McGill to his fiancee.

The victory at Vimy Ridge was called by a Paris newspaper, “Canada’s Easter gift to France.” In gratitude, the French in 1922 would donate the 91-hectares at Vimy Ridge in perpetuity to Canada.

Today, a massive monument in recognition of the Canadian success stands on Hill 145, which underwent a $20-million restoration that began in 2002. Another 12 First World War Canadian sites in Europe have also being restored. It took 11 years to complete the original Vimy masterpiece designed by Canadian Walter Allward.

Following Vimy Ridge, other Allied forces began to see Canadians not as members of the British contingent but as a distinct national force.

At home, Canadians shared in the pride of their soldiers. Vimy Ridge would for years be remembered with celebrations commemorating the Canadian triumph.

The victory was costly. The Canadian army suffered 3,598 dead and 7,004 wounded (my grandfather, Peter Gisli Thompson, was among the wounded). Canada’s new sense of nationhood was won through the untimely death of many of its finest citizens. Some 60,000 Canadians fell on foreign soil during the so-called “War to end all Wars.”

“This is Good Friday, and I am spending the day girding myself for action. For our Easter Sunday, with peace on earth and good will towards men, I take part in the greatest battle in Canada’s history ... So this is to say farewell in case I go down,” wrote Lieut. Gregory Clark to his father. Unlike so many others, Clark, awarded the Military Cross for his bravery during the assault on Vimy Ridge, survived the war.

Trough a 2003 act of the Canadian Parliament every April 9 is now known as Vimy Ridge Day. Although it is not a national holiday: “In each and every year, on the ninth day of April, the Canadian Flag on the Peace Tower shall be lowered at half-mast,” reads the act.