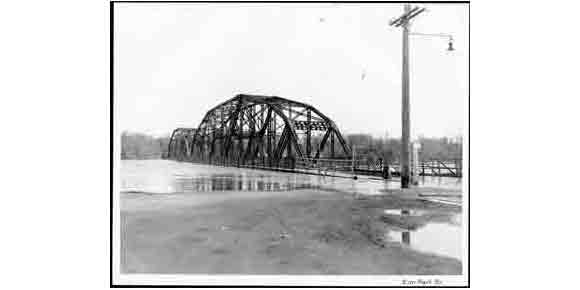 The Rural Municipality of St. Vital was created in 1880. Originally called St. Boniface, the name was changed to St. Vital in 1903 to avoid confusion with the nearby city of St. Boniface.

Elm Park Bridge
The Elm Park Bridge off Jubilee Avenue, known to many as the “Bridge Drive Inn bridge” due to its proximity to that summer institution, has stood the test of time and is Winnipeg’s fourth oldest bridge after the Redwood, Louise and Arlington.

Elm Park, the park, was created in 1890 by the Elm Park Company, a subsidiary of the privately-owned Winnipeg Street Railway Company. It was intended to attract evening and weekend passengers onto their expensive, new streetcar line which ran down Osborne Street to Jubilee Avenue.

In 1912, the company decided that there was more money to be had by getting out of the park business and subdividing the land for residential development.

To sell their lots at a premium as part of an exclusive suburb, rather than for a pittance to summer cottagers, the seasonal pontoon bridge that brought people across the Red River to the park’s entrance in St. Vital had to be replaced.

To coincide with the start of their land sale campaign the company announced that a permanent, steel truss bridge would be erected. Construction got underway in 1913 and it was officially opened in March 1914.

A newspaper article at the time described the bridge as 159 meters (521 feet) in length, which included a swinging span in the middle to allow boats to pass through. It is hard to imagine now, but the five-metre-wide (16-foot-wide) roadway accommodated two-way vehicle traffic until 1973.

The Elm Park bridge’s construction costs went well over budget with the final tab somewhere between $100,000 and $125,000. To recoup some of this additional expense, the company set up a toll booth and charged five-cents for pedestrians, ten for cars and twenty-five for trucks.

Even with the toll in place, Elm Park was a busy bridge. The nearby St. Vital bridge at Osborne Street wasn’t built until 1965, making this one of just three ways Winnipeg motorists could cross into St. Vital.

Over time, the condition of the bridge and its approaches deteriorated to the point that the Elm Park Company closed the span indefinitely in August 1945. Later that year, the Municipality of St. Vital purchased it for $5,000 and made the necessary repairs. It reopened toll-free.

The bridge has had at least a couple of near-death experiences.

It was nearly washed away during the 1950 Red River Flood when water came right up to its deck level.

In 1996, engineers discovered that after standing up to more than 80 years of seasonal ice floes the concrete piers beneath the bridge were failing. The city considered demolishing the structure until a study showed that it would cost $1 million, about $400,000 more than the cost of repairs. It opted to make the repairs.

Norberry School
Early residential subdivisions such as Elm Park brought thousands of new residents to St. Vital in the 19-teens and early 1920s. This influx of people had a huge impact on area schools.

In 1920, there were just a handful of small schoolhouses serving the municipality and they were all severely overcrowded. In 1922, two substantial, new elementary schools were opened: Windsor School on Cunnington Avenue and Norberry School on St. Mary’s Road at Frederick Avenue.

The two-storey, eight classroom Norberry School, which is no longer a school but part of the Louis Riel School Division’s administration building, was designed by Scottish-born architect James M. Lethbridge and cost $75,000.

When Norberry School opened on February 17, 1922, it was welcomed not only by parents but the community at large. In its first months of operation it played host to dozens of evening and weekend events; everything from dances and whist tournaments to political speeches and Girl Guides meetings.

By the end of that first school year, the school had already reached its capacity of 350 students and there were 200 new children expected to enroll come September. One of the old two-room schoolhouses Norberry was meant to replace had to be pressed back into service and school starting times had to be were staggered for different grades.

In April 1923, area residents voted in favour of adding an adjoining six-room, $49,000 addition. The new building, which features a Tyndall stone neo-gothic style bay window, was also designed by Lethbridge.

Initially intended to be an elementary school, Norberry reached out to all ages soon after it opened.

In November 1922, a night school for adults was added. It offered a class called “basic education” that taught reading, writing and arithmetic, and another to learn typewriting and shorthand.

Also in 1922, the school board created a high school division at Norberry School - a first for St. Vital. It meant that area children who previously had to travel to Winnipeg or St. Boniface for higher education could stay in the community. By 1930, the high school was renamed Glenlawn, after the school division, and moved to its current home on Fermor Road in 1950.

Norberry School’s population peaked in the 1950s at around 700 students and then began a long, steady decline. By the early 1970s it had over 300 empty spaces and was closed in August 1978.

St. Vital Library
A campaign to establish a public library in St. Vital dates back to at least the mid-1940s, though it wasn’t until an October 1953 referendum that residents voted in favour of creating one.

St. Vital Library Board hosted a series of fundraising events and book drives before throwing open their doors in September 1954 in a rented space at 584 St. Mary’s Road near St. Anne’s Road.

By 1955, the library had outgrown its premises and the library board announced that it was seeking a larger, permanent home but finding an appropriate space at a price it could afford proved difficult. It wasn’t until 1961, when St. Vital council voted to sell it a site along Fermor Road for $1, that the project went ahead.

In November of that year, the library board hired architect George A. Stewart of Fort Garry to draw up plans. Stewart was responsible for designing the Fort Garry Library which opened two years earlier.

The long, narrow lot proved to be a challenge as neither the board nor Stewart favoured the trend towards open concept floor plan libraries. They preferred a series of more intimate spaces. To achieve this, the building’s 1,607 square meters (17,300 square feet) includes two semi-circular shaped rooms at one end that feature generous mezzanine levels.

Taubensee Construction of Niakwa Road won the construction contract and began digging the foundations in September 1962. Work continued through the winter and the St. Vital Library was ready for its first patrons in April 1963. The official opening ceremony took place on June 9, 1953 when Premier Duff Roblin cut the ribbon.

The library is currently closed as it undergoes a $2.6 million renovation. It is expected to re-open in early 2018