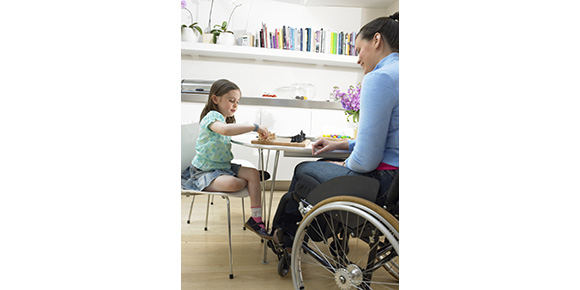 It’s no secret that Canada’s population is aging.

And as people age, their living requirements change. Instead of staying in two-storey homes, people from their mid-50s on up are moving to condominiums or bungalows — homes that allow them to live on one level, eliminating the need to go up and down stairs.

However, living on one level is only part of the livability equation.

Many people, for one reason or another, deal with mobility issues every day. If you’re in a wheelchair, use a walker or even a cane to get around, negotiating a bungalow built to normal building standards can be a challenge.

Over the past several years, builders have introduced the concept of the visitable home. Those homes represent a great option for the mobility-challenged, said Dave Dessens, the city of Winnipeg’s housing policy co-ordinator.

“If you struggle with a mobility issue, a 100-year-old home can be completely inaccessible with its front steps and narrow doorways,” he said. “By contrast, a visitable home’s design makes it possible for virtually anyone to come to your home for a visit.”

What does the term “visitable home” mean?

“First of all, the entrance of a visitable home is built at grade so that there are no steps to deal with,” Dessens explained. “Next, the doors are wider at 36 inches rather than 32 inches — that makes it much easier for someone using a wheelchair or walker to enter the home. There’s also a main floor bathroom with 36-inch doorway and five-foot turning radius inside. Aisles in the kitchen can be wider, as well.”

Hilton Homes’ Spencer Curtis said visitability is a concept that an increasing number of people are considering.

“Initially, the concept was a bit of a question mark with home buyers,” he said. “But as time has gone on, it’s caught on.

“Today, people are pleased to have the option of buying a visitable home. Some just like the appearance of having an at-grade front entrance, while others appreciate the design because it makes it easier for aging relatives or small kids to get into the home. Not only that, but the concept of having a home where you can age in place is gaining more traction.”

REALTOR® Rob Hutchison, who serves as a sales representative for A & S Homes, said that visitable homes are no longer a novelty as they’re now a viable option for clients.

“As a REALTOR®, it’s good to have visitable homes as an option, because we’ve been seeing more people who have a relative or friend who’s mobility challenged, and are considering a visitable home as an option so they can come over and visit without having to deal with obstacles like front steps and narrow doorways.

“The homes aren’t necessarily for the buyer, at least not yet. But the ease of accessibility is a good feature — one that they may need themselves years down the line.”

He added that some buyers are taking the visitable concept one step further.

“We’ve being doing more options such as putting a main floor bedroom next to the bathroom so a parent or parents can come and live with their kids and age in place with family,” he said. “Visitable homes are good to have as an option because they can make life so much easier for people.”

“Not only does a visitable home allow you to host aging parents and age in place, but it also provides you with a home that will be more flexible to use in the future. Older homes are much harder to retrofit, and the process can be quite costly.

“When you’re building a visitable home, you can not only have the no-step entry, wider doorway, main bath with wider turning radius built in to the design, but you can also build in bracing for grab bars in the bathroom, and even lower light switches and raise the height of power outlets.”

He said it’s his hope that visitable homes will continue to grow in popularity. “We’re (the city) encouraging the development of visitable housing. We’re hoping REALTORS® will continue to make buyers aware of the visitable home option, so that people will consider it, with more saying, ‘That’s what I want.’ If we can continue to increase the supply, our hope is that we’ll be able to make the entire city more accessible.”