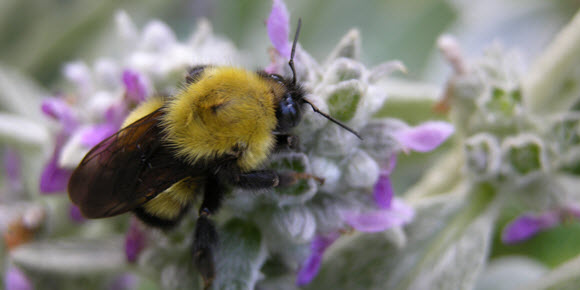 What happens when a grain of pollen is dropped on the stigma of a flower? How does it meet up with the plant’s ovaries?

I used to think, if I thought about it at all, that the grain of pollen tumbled, like Alice in Wonderland, down a narrow tunnel until it somehow connected with the sweet spot. Nothing could be further from the fact.

When a grain of pollen, compatible with the particular plant in question, lands on its stigma, a hormone is activated which causes the growth of a pollen tube that then extends down through the style and into the ovule. Inside this pollen tube are the male gametes or sperm that will fertilize the egg. When the pollen tube hits the egg, it thrusts the two sperm cells into the egg. If there are water and warmth in amounts dictated by the plant’s genetics, fertilization is now complete.

The means of getting the pollen from the female anther to the male stigma can vary, much of this happening thanks to the action of the wind and sometimes by means of rain or even dew, but helpers in the form of animals, insects and birds play a large role, when they pick up bits of pollen as they search for nectar and drop these bits off as they go from flower to flower. Pollen grains of plants that rely on insect pollination, are covered with a sticky substance called pollenkitt (sometimes called pollen coat or pollen kit) which ensures their insect-borne transit.

Pollination is only step one of a complicated process, however. The real magic begins with the growth of a pollen tube from a predetermined growing point on the pollen grain.

The pollen grain now resting on the stigma of the plant absorbs water from the stigma and begins to swell. It is stimulated into action by auxins and some other chemical interchange between the stigma and the pollen grain. Just as in other growing parts of the plant, the pollen grain has an apical growing point which carries an extra dose of calcium to drive and direct apical growth. At this point, apparently, the female tissues send out signals that stimulate the growth of the tube and help guide it to its destination.

Scientists are still studying how the pollen tube works. They have evidence, for example that testosterone, progesterone and estradiol, all mammalian steroid sex hormones, are implicated in stimulating pollen growth and dictating the length of the tube.

Did you know that every silken strand on an ear of corn is the style of the kernel of corn down which travels a pollen tube that attaches to an ovary and produces a kernel of grain? There are usually about 800 to 1,000 strands per cob or ear of corn. The pollen tubes must travel all the way down the strand of silk to the ovule inside the kernel. They do so at a very rapid rate, growing one cm per hour or as much as a foot long overnight.

The way this happens is fascinating. To grow, you need material to produce new cells. While there is a certain amount of material resource available within the tube and the style to get this started, the pollen tube extends its possibilities by recycling spent material, repurposing it to grow new membrane.

It turns out that human neurons and plant cells are not dissimilar in the way plant cell-to-cell union takes place. The plant activity resembles the way animal neurons communicate, through what we call synapsis, in cell-to-cell interaction. In plants, growth occurs by cell enlargement and in a lineal fashion from meristems – growing tips – whereas in animal growth, cells reproduce by increasing the number of cells and in all directions. Plants can often grow continuously and replace a broken part, whereas in animals there is generally a limit on size. Regrowth for replacement, as in the liver, rarely happens. As well, in humans only stem cells can differentiate into different cell types, but in plants most cells can do this.

Both the differences and the similarities are important in understanding how we might one day be able to repair a damaged spinal cord, for example – or even grow a new limb.

So the next time you are watching a humble bumble bee busily harvesting nectar and accidentally dropping off a load of pollen on a neighbouring plant, think of the miracle about to take place as the process of regeneration is about to begin.