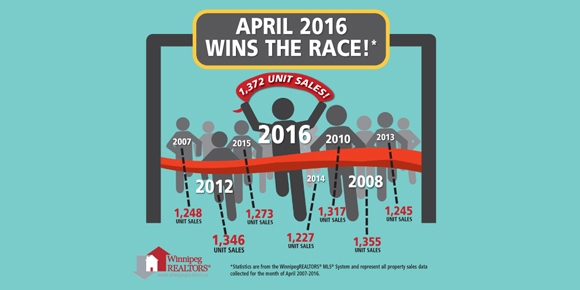 April surpassed the same month last year’s total sales and the 10-year average sales by eight per cent, according to statistics released by WinnipegREALTORS®.

According to the association’s month-end housing market report for April, the 1,373 transactions through its MLS® system were the highest-ever total for the month.

Year-to-date MLS® sales were also up by eight per cent. There were 3,800 units sold this year by the end of April.

“The current pace of sales is only surpassed by 2012,” said Peter Squire, the association’s market analyst, “while a year-to-date dollar volume of more than $1 billion has risen 10 per cent over the same period in 2015.”

“With no major spring storms to deal with, as in some past years, I believe our MLS® market had the perfect conditions for sales in April,” said Stewart Elston, the president of WinnipegREALTORS®.

“We enjoyed a healthy influx of buyers taking advantage of a very competitive market with very favourable mortgage interest rates.

“At the same time,” he added, “we witnessed a reduction in the number of listings coming onto the market, which resulted in more balanced conditions — sellers are feeling more optimistic that the supply of listings is starting to level off.”

Elston said the good news about Winnipeg’s economy reported in the Globe and Mail’s Report on Business section, shows that the city is performing on all cylinders, which is also a boon to the local housing market.

The newspaper feature article reported Winnipeg is “powering the engine of one of Canada’s most stable, resilient provincial economies.”

According to an RBC Economic research report cited in the Globe article, Manitoba is “projected to have the third-highest rate of economic growth this year, 2.2 per cent, ... and enjoy the lowest unemployment rate in the country, 5.4 per cent, well below the Canadian norm of seven per cent.”

Squire said some areas would have welcomed more listings where sales were brisk in April, “but from an overall market perspective, the supply needs to come back to a position more in line with existing demand.

“Of course, not all areas, nor property types, share the same outcomes month over month,” he added.

The property type that stood out in April was condominiums, according to Squire.

Last month, condo sales increased by 34 per cent over April 2015 and were up 21 per cent year-over-year over the January to April period last year.

“The comeback in condominium sales activity this year is encouraging,” said Elston, “since there is a significant inventory of new and resale condominiums presently on the market. Buyers are wakening up to this fact and availing themselves to some attractive offerings.”

In the rural areas served by the association, residential-detached homes for the first time in the southwest quadrant had an average sale price of over $400,000.

“Two of the 194 sales were in excess of $1 million," said Squire, “which is indicative of a good move-up market this spring.”

According to the association’s April housing market report, the most active price range for residential-detached home sales was between $250,000 and one dollar below $300,000, which accounted for 21 per cent of all transactions.

The highest sale price during April for a residential-detached home was $1.25 million, while the lowest was $9,000.

According to the report, it took, on average, 26 days to sell a home in April, which was two days faster than in April 2015.

The average number of days it took to sell a condo was 41, eight days ahead of last year’s April pace.