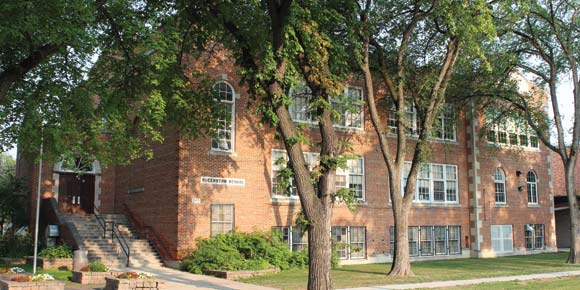 River Heights began in the summer of 1904

The promotion of the sale of residential lots in the new subdivision of River Heights began in the summer of 1904 following a pair of announcements about major future developments in the area.

The province announced that a new Agricultural College, now the Asper Jewish Community Campus, was on the horizon. Also, the city’s parks board revealed that it had purchased the first 300 acres for what would become Assiniboine Park, the city’s largest playground.

The projects brought with them the promise of modern streets and even a streetcar line connecting the area to Winnipeg and set off a land speculation frenzy.

Progress, though, was slow and it took a couple of decades before a significant residential population called the northern portion of River Heights home.

Queenston School was the third elementary school to be constructed in River Heights after Robert H. Smith in 1919 and Sir John Franklin in 1921.

By 1930, these schools had become so overcrowded due to new residential development that the school board held an emergency meeting in January 1931 to discuss what needed to be done before the next school year began.

Despite the financial restraints of the Depression, it was felt that a new school had to be built immediately. The board already owned land along Kingsway between Queenston and Brock Street, a parcel purchased years earlier with the thought of future growth and decided to put the new school there.

The architect for the new school was Cyril Chivers. He had worked for the board before on Robert H. Smith School and is known for such landmark buildings as the Assiniboine Park Pavilion (1929) and the Winnipeg Auditorium, now Manitoba

The contract called for a twelve-classroom building with an assembly hall and a basement gymnasium. Chivers used traditional red brick with Tyndall stone trim in what is considered the “Collegiate Gothic” style popular for schools at the time. This included features such as arched windows and doorways and decorative corner quoins.

To ensure that the school was ready in time for September, excavation for the foundations began in February while the drawings were still being prepared. The tender for the construction of the $128,000 building was awarded in April 1931 to H. S. Walin and work got started right away.

The school was finished just in time for the new school year with Elizabeth Lawrie as its first principal.

When it was built, Queenston School’s catchment area, approximately Cambridge to Lindsay Street south of the Assiniboine River, contained 1,508 homes, but by 1945, there were 670 new homes in the neighbourhood. Rather than build a major expansion at Queenston, the school board chose to build River Heights School in 1947.

In November 2015, the school’s new gym, the Sheilah Sweatman Gymnasium was opened. It is named in honour of a 29-year-old search and rescue volunteer who grew up in River Heights and died in B. C. in 2011 responding to a submerged vehicle call.

Queenston School currently has about 200 students from nursery to grade six.

Due to the rapid pace of residential development in River Heights through the 1920s, a dedicated telephone exchange was needed in the area.

It wasn’t unusual for utility companies to disguise their infrastructure to fit in with the streetscape around it, but to do this in a higher-end residential neighbourhood proved more of a challenge. Manitoba Government Telephones hired architect Alexander Melville to design a building that would not only be attractive but functional.

Scottish-born Melville established his practice in Winnipeg in 1903. Along with his brother, William, they were responsible for designing many of Winnipeg’s early fire halls that still dot the urban landscape, though most are not active fire halls anymore.

In his solo career, Melville designed many attractive schools and private residences which is probably what attracted the telephone company.

Melville’s one-storey exchange building measures 46 by 68 feet and has a Spanish villa style finish. This includes a stucco covered exterior with red brick trim and red, fluted roof tiles. To further fit in with the neighbourhood, a wrought iron fence and attractive landscaping was added.

The $27,883 construction contract was awarded to H. S. Walin in February 1929 but work could not get underway until the spring thaw as twhe project required a great deal of excavation so that its approximately 9,000 telephone lines and other infrastructure could be buried underground.

When the exchange came online in December 1930, it was the city’s eight automatic telephone exchange. Automatic dialing meant that there would be no telephone operators working inside the building and that River Heights telephone numbers switched from five to six-digits.

The telephone company must have been pleased with the design as Melville would go on to create at least a half dozen more exchanges that can be found throughout Manitoba. Many are in the same Spanish villa style.

The River Heights Telephone Exchange is still in operation and owned by Bell/MTS.