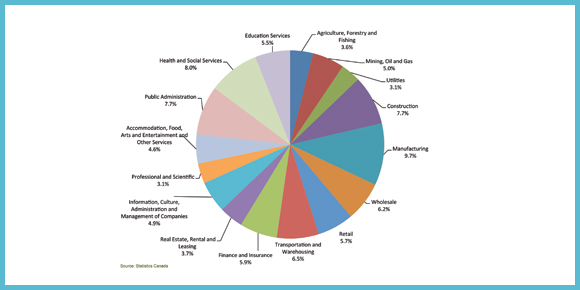 Looking forward to 2018, you realize when examining the housing market that the Winnipeg Metropolitan Region has considerable momentum and consistency in performance from previous years. It is a by-product of Manitoba’s diverse economy where no one sector dominates as can be the case in other provincial economies.

In a chart presented at WinnipegREALTORS® annual forecast breakfast in early February it shows Manitoba’s industrial base has 16 sectors with manufacturing being the largest at under 10 per cent of the industrial pie. This has created one of the most stable economies in Canada.

Manitoba’s range of GDP growth from 2002 to 2016 of only 0.6 per cent is far narrower in comparison to Canada’s.  The steady pace of growth not only mitigates wide swings in job creation and/or job losses but helps keep an even keel on employment. As a result, Manitoba has had one of the lowest unemployment rates in the country for many years. 2018 is no different with a forecast of 5.5 per cent.

People employed and feeling secure in their job commit to owning a home. While it may vary in what they choose based on pricing of the various property types available and location within the Winnipeg Metropolitan Region, they proceed to build their future nest egg by investing in a home.

Meeting demands of a growing population

A key factor in maintaining a balanced market where the fundamentals of demand and supply are held in check without one overwhelming the other, as evident recently in the Greater Toronto housing market, has been the excellent response of developers and builders to meet the demand of a growing population base.

No better example was in 2017 with very strong housing starts in both single-family detached and multi-family units. It is important to note here that this new construction includes purpose-built apartments which helps address much needed rental demand for those not able or interested in owning their own property.

The rental vacancy rate sits around 3 per cent now when in the early years of the first millennium decade it was lower and inadequate in meeting the demand from the influx of new immigrants to Manitoba as a result of the successful Provincial Nominee Program. The acute rental shortage at the time put severe strain on the WinnipegREALTORS® MLS® which is primarily comprised of resale inventory and consequently led to six consecutive years of double-digit average price increases.

Validation of a healthier and balanced housing market in 2018 comes from CMHC’s recent quarterly Housing Market Assessment (HMA) report released in January. It shows there is a low degree of vulnerability on potential imbalances that can affect housing markets. These include factors such as overheating, price acceleration, overvaluation and overbuilding. For example, an overheated market will see very high percentages of sales-to-new listings conversion ratios and thereby exert upward pressure on house prices. The Winnipeg HMA is at 61.6 per cent; far below the 85 per cent threshold for overheating.

The one factor where CMHC has shown concern has been overbuilding, but the HMA report shows the inventory of completed and unsold units remains below the threshold for overbuilding. It helps when condominium absorption levels were up 52.5 per cent in the third quarter of 2017 from the same quarter the year before.

From a WinnipegREALTORS® perspective with an eye specifically on its MLS® performance in 2018, it expects to see sales in excess of its 13,000 threshold level mark which it eclipsed the last two years. It expects to see dollar volume based on another year of modest average price increases to likely surpass the $4 billion level for the first time. You only have to go back to 2002 when WinnipegREALTORS® had its first $1 billion worth of MLS® transactions.

With the new Office of the Superintendent of Financial Institution (OSFI) stress test applying to all mortgages this year — uninsured and insured — and higher mortgage rates, you can expect some pressure on single family home prices and sales activity.

The average single family sales price in 2017 was $315,719, one of the lowest in comparison to other major Canadian housing markets. The forecast is for a slight drop in sales compared to 2017 however still holding on an average price increase. The last time WinnipegREALTORS® experienced a slight average sales price decrease from the previous year was in 1989.

All in all, the Winnipeg Metropolitan Region housing market should overcome the challenges before it in 2018 and record another solid year of MLS® sales.