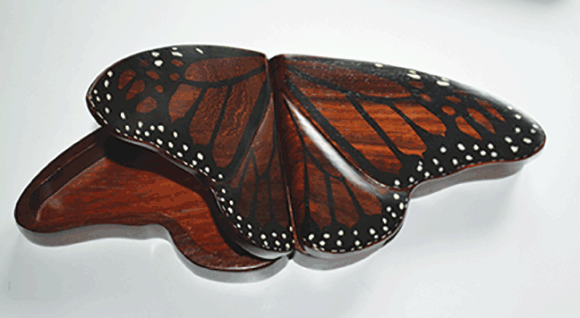 How to build a monarch butterfly box

My wife and I had a brush with fame three decades ago when we received a signed note from the late Manitoba-born author Margaret Laurence. Laurence and illustrator Muriel Wood had recently published a hardcover edition of The Olden Days Coat, which contained drawings of a wood box with a monarch butterfly on the lid. My wife had purchased the book for our first child, and, by coincidence, we had just collaborated on the creation of a monarch butterfly jewellery box.

Laurence’s note, dated Febuary 22, 1986, said: “Dear Penny and David Square — Thanks so very much for your letter. What a marvellous coincidence, or whatever it can be called, that you are making beautiful wooden boxes with recurring images of the Monarch butterflies! I was so touched and pleased to receive your letter and the lovely pictures of some of your work. I wish you and your child-to-be all possible blessings. Sincerely, Margaret Laurence.”

The monarch butterfly box Laurence referred to was made from African padauk, a vivid blood red wood when freshly machined, maturing into a handsome reddish brown with black streaks.

Making the box proved somewhat difficult. In fact, my prototype had to be sawn in half so the wing-shaped lids could be mortised to receive small brass hinges and to increase the space between the lids so they would open. The prototype taught me that I had to start by building two half-boxes that were subsequently glued together to form a complete butterfly box.

My wife drew a paper pattern in the shape of a monarch that I transferred onto a padauk board 7/8 inches thick by six inches wide and 14 inches long. I cross cut the board in half and band-sawed the outside of each half to match the drawing.

To remove the inside waste, I made an entry cut into each block of padauk on the side where the two halves would be glued together, thereby strengthening and hiding the kerf. When the waste was cut out, I was left with two hollow butterfly box-shapes with quarter-inch thick sides. I removed the inside kerf marks with a three-quarters-inch diameter sanding drum chucked into my drill press, starting with #80 grit paper and finishing with #120.

When the two sides were completed, I cut two mortises in each of the lids and attached brass hinges with screws. Then I glued the two halves together. When the adhesive was dry, I placed the joined box onto a 1/8-inch sheet of padauk, which formed the box’s bottom. Using a pencil to trace the outside shape of the box onto the wood, I was careful to match long grain with long grain so the bottom would expand and contract at the same rate as the box.

If the long grain of the box was glued to a cross grain bottom, the bottom would come loose after a few years because of opposing expansion. The butterfly box I kept for our collection was built 30 years ago and the bottom is still firmly adhered.

The following day I cut away the bottom’s overhang by following the outside shape of the box with a band saw. I let the bottom stand about 1/16-inch proud to prevent the blade from gouging or removing padauk from the sides of the box. With that job completed, I sanded the bottom flush to the box with a drum sander, continuing to work from #80 to #120 paper until the sides and bottom were smooth and free of kerf marks. Some fine filing was required where two curves met at the back edge of the box.

The wing-lids were cut from half-inch-thick padauk, large enough to overhang the edges of the box by about 1/8 inches to make opening easier. I tapered one side of each wing on the band saw from a half inch at the centre where the hinges are mortised to 1/8 inch at the tip. Then, I used carving chisels to remove enough wood to give the impression that there was an overlap on each wing, similar to a real monarch.

After two coats of shellac sanded with #320 wet/dry paper, my wife used her artistic skills with pen and ink to draw the black markings and white spots on the wings, distinctive to monarch butterflies. The entire box was sealed with two coats of semi-glass rubbing varnish and finally polished with carnuba wax.

We thank the late Margaret Laurence for inspiring us to continue to create butterfly boxes for many years after our initial correspondence with her.