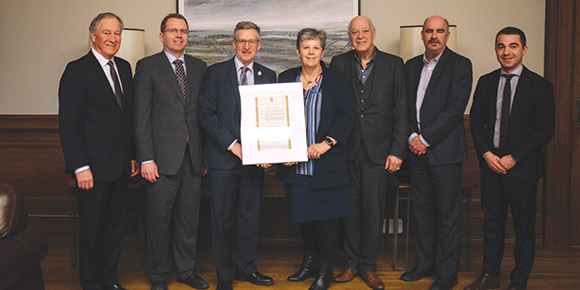 On Monday, November 19, Minister of Growth, Enterprise and Trade, Blaine Pedersen, officially proclaimed the week of November 19-23 REALTOR® Week. The proclamation recognizes REALTORS®  as they help Manitobans through the most significant investments of their lives, and act as advocates for enhanced consumer protection and individual property rights.

During the week, the Manitoba Real Estate Association (MREA) highlighted some of its advocacy tasks on Broadway that benefit home buyers, property owners and communities.

Front and center is a call for land transfer tax relief. The tax was first implemented in 1987 and is applied on a property when title is transferred, with a few exceptions. Since the tax was brought in, the brackets haven’t changed, and as a result, the cost of the tax has now ballooned to almost $3,700 on an average priced residential detached property in Manitoba.

Noted economist Dr. Jack Mintz has called land transfer taxes “one of the worst levies to raise revenues” for government. He further adds that “it makes sense to tax people according to their well being as measured by their enjoyment of goods and services, their income or even by the value of property (wealth). Whether a household or business decides to move or change use of a property, it is not clear at all why they should be taxed”.

However, as the land transfer tax brings in $90 million to the Manitoba government annually, it isn’t going anywhere overnight. This is why targeted tax relief to those most in need should be a priority. As a result, MREA has recommended that the provincial government implement a $750 tax credit for first-time buyers and people with disabilities, matching the existing federal tax credit. Not only would the tax credit help those most in need, it could also open up rental housing stock, as most first-time buyers are moving out of rental accommodations.

The move also puts Manitoba in line with other provinces. Manitoba and Alberta are the only two provinces outside of Atlantic Canada that do not offer tax-relief for first-time home buyers. However, Alberta doesn’t levy a land transfer tax, which makes Manitoba a true outlier.

Our current education funding model also supports taxation without representation. People with a second property can only vote for the school trustees where their principal residence is, leaving all those with a cottage no say in the education portion of their property tax bills. As the education portion can be as much as 80% of the entire tax bill in some school divisions, this is clearly unfair to many property owners.

While moving from multiple rates may sound difficult, it can be done. In 2009, Saskatchewan took away the ability of school boards to set tax rates, as they established centralized standard mill rates across the province. With the province promising to launch a review of Manitoba’s education system soon, the timing is ideal for our current complex and unfair K-12 education funding model to be reformed in a manner that directs resources to front line services.

MREA also discussed the launch of the first real estate Global Business Council in Canada, and the Manitoba Tipi Mitawa program, in meetings at the legislature. On Thursday, MREA hosted its fourth annual political symposium, Forward Together. The event brought together over 200 Realtors from all across Manitoba for a half-day of education, networking and information sharing. Those in attendance heard from the Minister of Finance, Scott Fielding, and the Leader of the Official Opposition, Wab Kinew. The event was capped by a keynote speech from the Honourable James Moore, a former federal government Industry minister.

While REALTOR® Week occurs just once a year, advocacy is an ongoing process. As preparations for the 2019 provincial budget are well underway, MREA will continue to be a strong voice for Realtors, home buyers and property owners on Broadway.

Michael Juce is the Director of Public Policy of the Manitoba Real Estate Association (MREA).