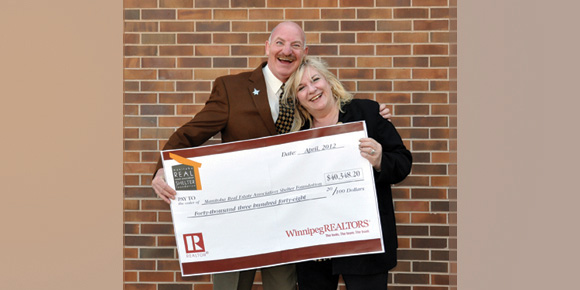 Shelter is among the basic needs for survival in today’s world, but sometimes it’s beyond reach due to a variety of circumstances that can arise to the detriment of an individual’s well-being.

REALTORS® in Winnipeg, Manitoba and across Canada recognize this dilemma and have initiated a number of programs and projects to alleviate the plight of people in need of a safe shelter in order to enhance their quality of life.

“REALTORS® care about their communities,” said Winnipeg REALTOR® Hannon Bell, a past-chair of the Manitoba Real Estate Association (MREA) Shelter Foundation. “There are a number of things we do for the communities we live and work in that shows the public that we aren’t just in the business of selling real estate.”

The MREA Shelter Foundation is a prime example of the commitment made to enhance quality of life.

“Manitoba REALTORS® recognize that shelter is a vital component of our communities and understand that structured fundraising and philanthropy are beneficial to community development,” according to the foundation’s website. “Therefore, the Manitoba Real Estate Association Shelter Foundation Inc. was created to support Manitoba charities that are devoted to shelter-related causes.”

This year’s sixth annual event last April raised over $34,000 for the MREA Shelter Foundation. To date, the event has raised nearly $240,000 for the foundation.

“All of our REALTORS® care and want to fo their best to support charitable organizations in Winnipeg,” Roger Burns, the present chair of the MREA Shelter Foundation, earlier told the REN.

The foundation has donated funds to numerous charitable groups including Esther House, Siloam Mission, New Directions for Children, Youth, Adults and Families, Nova House, among others.

Another example of REALTORS® caring is provided by Royal LePage brokers and agents, who are hosting the Royal Roundup at Anderson’s Hitch ’n Post Ranch on Friday, October 2, from 7 p.m. to 1 a.m., with Winnipeg country music artist, Leanne Pearson, being the star attraction.

For the price of a $40 tickets, there’s also a dinner, door prizes, line dancing, a live band, bus transportation and a late-night snack. Tickets are available at 1877 Henderson Hwy. or by calling 204-989-7900.

Ruthe Penner, a past-president of WinnipegREALTORS® and the MREA, said the event is a fundraiser under the auspices of the nation-wide Royal LePage Shelter Foundation. All proceeds from the fundraiser will be donated to Winnipeg’s Alpha House, a long-term housing project where women and their children can escape abusive relationships.

The Alpha House mandate is not only to provide a place for families to live while transitioning away from violence, according to its website, but to work closely with the women to build back their self-confidence and self-reliance so that they can live independently and flourish as examples to themselves, their children and other women.

Alpha House was formed in 1989 by a group of women concerned with the lack of long-term housing and support for women and their children who were victims of abuse. The women knew that shelters were a short-term solution and that many women traumatized by years of abuse were unable to start a new life because they were not being provided with ongoing support. Alpha House Project was founded to fulfill this need.

Alpha House formally opened its doors to the first family in 1995. Since that time, over 138 families in need have turned to Alpha House to move their lives in a new direction and ultimately live life empowered.

“It’s our (shelter foundation’s) opportunity to provide safe places and havens for women and children to get away from abusive relationships,” said Penner. “It ties in with the real estate industry’s strong involvement in the communitities where we work and live.”

Since its inception in 1998, the Royal LePage Shelter Foundation has raised over $20 million across Canada and helped over 30,000 women and children.”