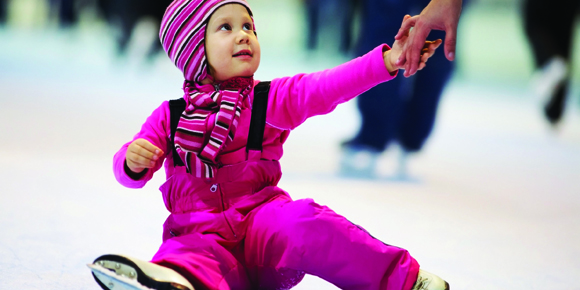 Time was, that not too many people would go to The Forks during the winter.

Turns out, all you had to do was give them a reason to come down. That reason is none other than the Red River Mutual Trail, a 6.1-kilometre-long trail that allows people to skate, walk, run or sled their way to The Forks down the heart of the Red River.

The trail has single-handedly brought The Forks alive in the winter, said Paul Jordan, the CEO of The Forks.

“If you went by The Forks 20 years ago late in a cold winter day, chances were the lights weren’t on, and it was closed,” he said. “That’s not the case now that the river trail is in operation.

“There’s been so much traffic that we’ve actually gotten to the point where we’re going to have to adjust our hours of operation to accommodate all the people that are coming out.

Just how busy was The Forks this past winter?

“This year, when the trail opened in February, we averaged about 10,000 people a day, compared to about 11,000 people a day in July and August,” said Jordan. “The message is finally getting out about the trail, and people are coming out and using it.”

He added that the strong winter attendance is no accident.

“The whole (trail) idea got going about 10 years ago. At that time, we started putting more resources into the concept. Then, things really started to snowball after we recorded the record for longest skating path (8.54 kilometres, in January 2008).”

This past winter, the Red River Mutual Trail wound its way from St. Vital, through Norwood (and other neighbourhoods) to its final destination at The Forks.

And, as those who used the trail found, it was more than just a trail to skate or walk to The Forks. It was lined by artistic warming huts, food stands, and there was even a restaurant, the RAW: almond pop-up restaurant erected on the ice for the second straight year.

The trail then culminated at The Forks and Arctic Glacier Winter Park.

The Forks’ evolution into a bonafide winter destination is great news, said Mike Scatliff, who is the co-chair of Economic Development Winnipeg.

“We’ve always talked about The Forks as the hub of Winnipeg, and plans for extending its reach were in place for a long time. The idea was to encourage people to go down to the waterfront.

“Now, people can access the trail (at several strategic points along it) to take it to The Forks, or to a neighbourhood within the city.”

Scatliff said opening up access to the trail — and, hence, The Forks, and other neighbourhoods along the trail — has had a resoundingly positive impact.

“We can now celebrate the winter as a fantastic part of our world. It not only promotes a more active lifestyle and drives economic activity, but it also helps spread the word about what Winnipeg has to offer.

“That authentic winter lifestyle not only draws in people who live here, but also extends to tourists. They see what we’re doing and where we’re going, and come here to go to The Forks to skate, shop or dine out with friends and family.”

City Councillor Brian Mayes (St. Vital), who skated the trail this past winter for the first time, said it’s something everyone should experience.

“I finally got down on it this year, and only wish I’d gotten down on it two years ago,” he said. “Taking the trail down to The Forks was a powerful, elemental experience. It’s like having a whole new park running down the middle of the city.

“The trail allows you to connect with nature, see the city and all kinds of different people. Then, the climax is The Forks, which is an incredible destination that has so much to offer.”

Mayes said he now wants to do his part to promote the trail in the coming years.

“Going forward, I want to talk to management at The Forks about how to make it easier to get out on the trail so more people can experience it, and The Forks. Getting out on the trail was a real epiphany for me. Feeling and seeing everything was a great experience, one that as many people as possible should tap in to.”