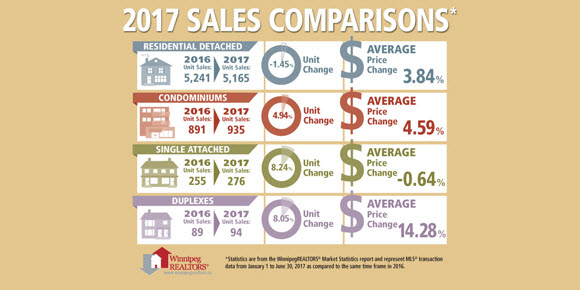 For the first six months of this year, sales surpassed 7,000 units for only the second time in the association’s history. In 2016, the 7,000 mark was also surpassed.

But for the first time, reported the association, dollar volume has gone over $2 billion at the halfway point of the year.

According to the report, the southwest area of the city has had an overall price appreciation eclipsing $400,000 this year.

June sales of 1,636 units were only two sales behind last year’s activity for the month, while dollar volume of $488 million was three per cent higher than in June last year.

“June is a good reminder of Winnipeg’s affordable housing market in comparison to other more expensive housing markets across the country,” said WinnipegREALTORS® president Blair Sonnichsen.

“In our local market, which has tightened up more due to brisk sales over the past two months, buyers are finding alternative property types or less expensive neighbourhoods in or outside the city.”

The report indicated the overall housing market can be characterized as balanced with active listings well above the 10-year average.

Active listings, or the current inventory going into July, sat at just over 4,900, which is down nine per cent from the same period last year.

Despite June sales being strong, according to the report, the two leading property types of residential-detached homes and condominiums experienced decreases when compared to June last year.

Residential-detached, or single-family, home sales declined by one per cent, while condos fell by seven per cent.

Offsetting these reductions were sales of single-attached homes and townhouse properties, with both experiencing double-digit increases. The increase for townhouses was 57 per cent over the same month in 2016.

“Not all local markets are the same,” said Sonnichsen. “There can be considerable differences within a local market, depending upon the property type, local and availability of listings to purchase. Realtors have the expertise to point out to buyers the options available to them.

“When realtors broaden the housing search area for buyers, it can be a real eye opener,” he added.

The association reported that the supply of residential-detached listings was stronger in the rural municipalities outside Winnipeg.

The rural MLS® zone had identical sales to last year of 1,330 units for the first six months of 2017, which represents the largest share of residential-detached sales at nearly 26 per cent of all transactions. The southwest of Winnipeg was second with 970 sales, which equates to 19 per cent of total sales.

Other property types, such as vacant land and resort, are also well stocked in relation to monthly sales.

Condominiums throughout the Greater Winnipeg market have not being experiencing demand outstripping supply.