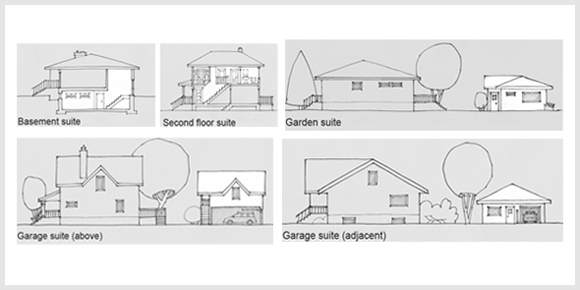 If you’ve been thinking of adding a secondary suite to your home, but thought doing so would be too difficult due to onerous city regulations, think again.

The fact is that the city of Winnipeg has actually been promoting the concept of secondary suites since 2008, emphasized Noah Yauk, planner in the city’s Urban Planning Division.

“For some reason, there’s still an assumption that the city opposes the construction of secondary suites,” he said.

“That’s not true. We’ve actually been decreasing regulations to make it easier for people to build them.

“Take attached secondary suites, for example, they’re completely permitted,” he added. “All you need to do is deal with our zoning department. Once you get your permit, you’re good to go.”

And while the process for detached suites still requires applications to be vetted through a public hearing process, construction of that type of suite is also being promoted by the city, said Dave Dessens, Winnipeg Housing Policy co-ordinator for Planning, Property & Development.

“The city is interested in developing affordable housing as our housing stock becomes more expensive. Secondary suites, whether they be detached or attached, are cost effective, and can serve as an alternate source of income for homeowners.

“It’s a concept that benefits everyone,” added Dessens.

Secondary suites are self-contained units with separate (often side) entrances, as well as a kitchen, bathroom and living area, which includes a bedroom.

Suites can be rented out, or be used by family, whether they be teenagers looking to learn how to live independently or aging parents looking for a clean, affordable home that’s proximate to family members.

Yauk said it’s typically easier to add a secondary suite to a new or newer home.

“You can run into some building code issues with existing dwellings, so we’re actually seeing more suites being developed in new or infill developments.”

That said, it’s not impossible to install a secondary suite in an existing home or on its property, said Dessens.

“In older homes, you can often do an attached one on the second floor; it’s also doable to put one over a garage.

“There is a certain height limit, but it can be increased to accommodate the suite.

“You also need to have two parking spaces, one for each residence,” he added.

And while there are certain guidelines that must be observed, those conditions aren’t terribly restrictive.

“The public process for attached suites has been lifted, so all you have to do is get a permit, and do it. There’s a bit more to go through for detached suites, but they’re also very doable.”

It turns out that the province of Manitoba also supports the secondary suite concept, he added.

“Their other requirements are that the suite be affordable, and that it be rented out at a specific amount to ensure affordability.”

Dessens said that if homeowners follow guidelines, there shouldn’t be any issues.

“If you do it properly — take out the proper permits and build to code, you shouldn’t have any problems. It’s a great option that more people should consider.”