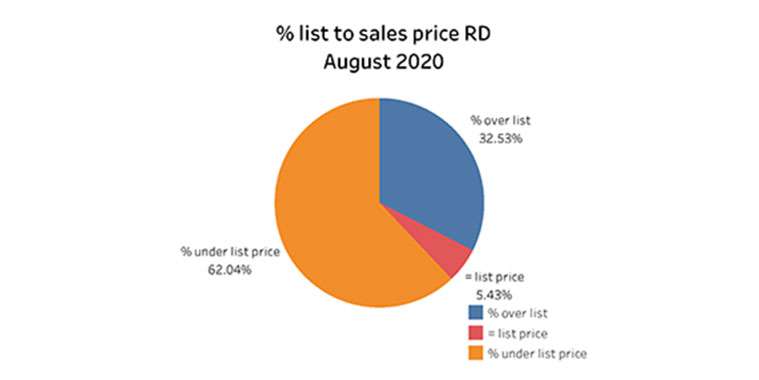 After another record-breaking month in terms of seeing August blow away its 2019 best-ever monthly sales result of 1,439 — by 406 sales — you know these indeed are not normal times.

The 1,845 sales transacted in August is a continuation of three consecutive months of sales over 1,800. Prior to the establishment of  this new threshold of monthly MLS® sales, May 2019 was Winnipeg-REALTORS® best sales month ever with just over 1,700 sales. For the record, June and July this year were virtually clones of each other, generating 1,897 and 1,898 in sales respectively.

The pandemic delayed what is your typical spring market — where listings rise significantly starting in April in anticipation of brisker second quarter sales. May typically outperforms any other month in sales with the exception of June, which can occasionally be even stronger in some years. The summer months of July and August are similar to May and June, where they can be neck and neck in number of sales but at a lesser level of activity than the busier spring months.

Last year is a good example where July and August had 1,440 and 1,439 sales respectively. It was  their highest  combined total up until 2020. The next most active months in a calendar year are April and September where they reside in the 1,100 to 1,300 sales range. April is more active than September, where it reaches the top of this range more often — eclipsing 1,300 once in 2016  — while the fall month is commonly generating sales from 1,100 to 1,200.

June 2020 clearly was the beneficiary of a delayed spring market, which saw both April and May down considerably from sales the previous year. While it is totally understandable that the real estate market rebounded once the economy reopened, and REALTORS® adopted new protocols to enable buyers and sellers to successfully and safely consummate a sale, what cannot be said with any degree of confidence — given the unchartered territory we are still navigating — is the extent of this recovery in terms of the sales numbers and their consistency over the past three months.

As has been mentioned previously, it is a v-shaped recovery where sales drop off precipitously but at some point level off and then roar right back up again. WinnipegREALTORS® MLS® listings and sales plummeted in late March and did not begin leveling off in comparison to last year until the third and fourth week in May. From then on, sales in particular, started to outpace the same weekly result in 2019. If you compare the week of June 3 to 9, or the 23rd week of the year to the same period in 2019, MLS® sales were up 12 per cent. The following week they accelerated more quickly to 17 per cent, and then literally took off in the June 17 to 23 week with 450 sales compared to 328 in 2019 — a 37 per cent increase! It has been that way ever since the second half of June.

Another revealing indicator of stronger sales to come was the metric on the number of showings captured on our database. For the week of June 3 to 9, showings were up 31% with 9,759 compared to 7,461 in 2019.

Listings have not had the same meteoric rise in the recovery period as sales. Vendors have been reluctant to put their homes on the market, whereas buyers are much more willing to go out and purchase a home in the current conditions. A Probe Research survey that WinnipegREALTORS® conducted jointly with the Manitoba Real Estate Association (MREA) in early June showed conclusively nearly 9 out of 10 Manitobans said the pandemic would not deter them from purchasing a home. In fact, some Manitobans said the coronavirus may get them off the fence to go out and purchase a home sooner than they originally planned.

The result is that listings — while making a recovery just as sales did — did so to a much lesser extent. They certainly came back from such marked decreases in April and May but took time to come up to last year’s levels. For the weeks May 27 to June 2 and June 3 to June 9, listings were down 5 and 7 per cent respectively in comparison to the same weeks in 2019. New listings coming onto the market in June just edged out June 2019 with a less than 1 per cent increase. In contrast, sales in June were up 24 per cent.

While August is similar to June in that listings are closely matching the number that came on the market in 2019, July new listings actually fell back 9 per cent in comparison to the number entered on the MLS® in 2019.

We therefore have an uneven market recovery with the brisk sales that WinnipegREALTORS® has never seen before in the last three months nowhere near matched by gains in listings. As a result, active listings, or current inventory, is down at the end of August by 30 per cent in comparison to the same time last year.

This places our market going into the fall in what is referred to as a seller’s market, where it is no longer balanced as it has been pre-pandemic. With the seller in the driver’s seat, many more opportunities to generate multiple offers for a property results, and above-list-price sales occur more often. In July and August, nearly one out of three residential-detached property listings sold for above list price.

It is also noteworthy that brisk demand in August depleted the existing inventory for single-family homes by 67 per cent. So if no new listings come on the market in September and subsequent months, based on current sales activity, we will run out of supply in one and one-half months. Four to five months of inventory is considered more balanced depending on local market conditions.

So if you receive a card in the mail from your local area REALTOR® indicating there are buyers for your property, you should not be taken aback as a number of Winnipeg neighbourhoods are seeing whatever inventory they had available snapped up. Evidence of these listing shortages are when you see  the sales from the month greater than remaining inventory going into the next month. For example, in August there were ten residential-detached sales in Tyndall Park with only three homes left for sale at month end.

On a final note, the average residential-detached sales price in August was $349,247, up 11.7% from the same month last year.

It’s never been a better time to buy or sell a home, and a REALTOR® is ready and willing to help you do that.