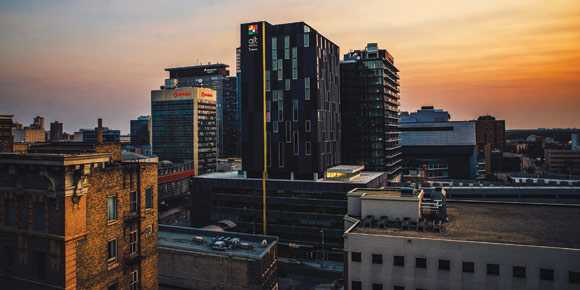 A strong Winnipeg market is only possible with a vibrant downtown

I still vividly remember my first day as CEO at the Downtown Winnipeg BIZ. It was approximately 15 years ago, and at the time, the number one priority of the business community was to increase the number
of residential people living downtown. I was given a mandate!

Looking back, I’m sure one of the reasons I was hired by the Downtown Winnipeg BIZ was because of the experience I had gained during my time at Winnipeg Housing, where I worked with the community to revive neighbourhoods in the inner city. This was done through the massive rehabilitation of homes through the collaboration of many organizations, such as the
WinnipegREALTORS® HOP Program, and government intervention. You can’t have great neighbourhoods without people!

Although I had this experience, I recognized that the Downtown Winnipeg BIZ was and is not a development agency. Public and stakeholder education and advocacy became the Downtown Winnipeg BIZ’s most important ally, lobbying for the right tax incentives in order for developers to be attracted to invest in the downtown and turn a buck. I have to tell you, not many downtown agencies agreed, but WinnipegREALTORS® did and continue to be a true downtown ally.

The Downtown also found an ally in the then Minister Steve Ashton, who really understood the basics of market economics. At the time, there was literally no residential market downtown and the pump needed to be primed for developers to come back. A denser city meant increased taxes and lower operating costs for Winnipeg taxpayers. Makes sense.

Eventually both the Province and the City of Winnipeg united and created the Downtown’s first innovative Tax Increment Financing Policy. In turn, over the last several years, hundreds of new residential options have popped up in the downtown market, from rentals to condos, from affordable to luxury. As a result, downtown’s population rose from 12,000 (where it was stagnant for over a decade) to almost 17,000 people and climbing.

More residents have increased the demand for services, restaurants and more, and the arrival of unique and authentic local shops, cafés and restaurants is evident everywhere. With more residents calling downtown their home, you can also see an increase in young people filling the area. This in turn provides big opportunities that benefit numerous downtown corporations.

During this booming period, our Downtown also saw incredible investments in its parks, universities, and institutions, such as the Millennium Library, Bell MTS Place and the RBC Convention Centre. These have become the new people drivers to the downtown.

Building our Downtown has also become a lot smarter, as we are now taking a district-by-district planned approach.  In addition, Waterfront Drive has emerged as one of the best neighbourhoods in the city to live in, and the SHED District, the newest and only entertainment district in Winnipeg, is now home to dozens of restaurants. This planned approach has proven to be the medicine to attract larger private sector investments like Centrepoint, True North Square, and many other smaller investments that are just as important.

Housing is just one aspect of building a great community.  Community development is the other.

The Downtown Winnipeg BIZ began ramping up its cleaning, safety and event programs, now almost 100-staff strong. ManyFest was created as well as the well-known Downtown Farmers’ Market, among many other events and programs.

The Downtown Winnipeg BIZ has also begun talking about the social challenges which required a much needed voice to begin moving the needle toward social development. Ending homelessness and creating homes and jobs for people in need is just as important to developing our Downtown. Our goal is for Downtown to emerge as a place for all Winnipeggers, and to create a more tolerant city.

All of this would not have been possible without the support of the business community, the City, the Province, and the numerous agencies that we’ve worked with over time.

There has been a lot of change in the last 15 years.  In fact, Downtown Winnipeg is known across North America as an Urban Laboratory, a testament to why almost 800 of North America’s greatest thought leaders converged in our City last year at the International Downtown Association Conference & Trade Show.

Fifteen years later, many people feel that Downtown Winnipeg is better off. I say, the work has just begun.

There is much more work to do, but the roadmap to continue has been laid out and just needs to be followed. Downtown partners will need to double down in order to repeat the success of the last decade.