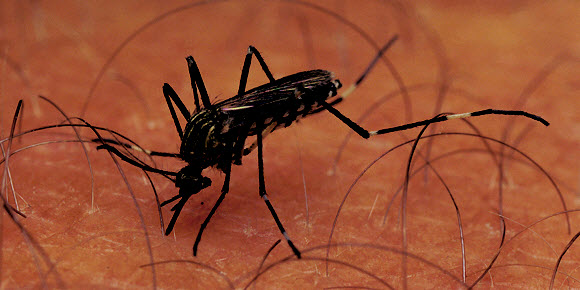 The city is urging homeowners to help out in the battle against one of the dreaded tormenters of Winnipeg summer evenings, from dusk to dawn, which, of course, is the buzzing nuisance called a mosquito.

The Insect Control Branch has launched the Standing Water Action Team, or SWAT, its latest weapon in the fight against mosquitoes.

The branch is calling upon Winnipeggers to become dedicated to the removal of standing water that acumulates on private property.

A homeowner becomes an “agent of SWAT” by actively draining, dumping or covering water-filled containers such as buckets, rain barrels and eavestroughs beginning now and after rainfalls.

“By encouraging homeowners to drain, dump or cover standing water in their yard from May until August, all Winnipeggers will benefit by reducing the overall adult mosquito population,” said Nawolsky. “We can make a genuine difference.”

Mosquitoes lay eggs in water-filled containers such as wheelbarrows, buckets, eavestroughs, rain barrels, and birdbaths and standing water is the ideal environment for the development of Winnipeg’s mosquito larvae.

A single birdbath filled with standing water can generate as many as 1,000 adult nuisance mosquitoes.

When selling your house, it also helps that buyers aren’t forced to swat away mosquitoes when they attempt to get to the front door.

There’s another reason why homeowners should become agents of SWAT.

West Nile Virus (WNV) is a mosquito-borne virus that can cause severe illness including encephalitis (swelling of the brain) and can sometimes result in long-term complications and death.

The risk of WNV varies from year to year based on precipitation, temperature, mosquito populations and other factors. In southern Manitoba, anyone can be exposed to an infected Culex tarsalis mosquito from June to September. The highest risk period occurs when the infected mosquito populations are greatest, typically from mid-July through the end of August.

Individuals spending time outdoors, such as construction workers, farmers, gardeners, golfers, and cottagers, are at the greatest risk of exposure.

Some people who get WNV show no symptoms and do not become ill, others may show mild symptoms such as headache, fever, fatigue and body aches. Severe illness has occurred in all age groups. However, severe illness has occurred more commonly in older adults and persons with weakened immune systems. Recovery from these severe symptoms can take months or years. And, it should be emphasized that there is no vaccine, cure or specific treatment for WND.

The presence of the West Nile virus gives Manitobans one more reason to hate mosquitoes, a dislike that has been part of this province’s history since the arrival of First Nations people in the province.

They even tell the tale that the mosquito was created as a punishment. According to the legend, there once was a famine and two hunters came upon a white wolverine, which they killed. An old woman jumped out of the skin and promised them plenty of game if they treated her well. The famine passed, but the people came to dislike the old woman because she took the best pieces of meat for herself. Despite her warning that a great calamity would befall them should they break their agreement, they killed her.

Time passed and the people began to believe the old woman had deceived them. One day, a hunting party chased a reindeer which led them to her skeleton, and one of them in derision kicked the skull with his foot. In an instant a small spiral vapour-like body arose from the eyes and ears of the skull ... that attacked the hunters with a great fury and drove them to the river for protection ... the air became full of avengers of the old woman’s death.”

To keep the “avengers of the old woman’s death at bay,” homeowners can take up the SWAT challenge.