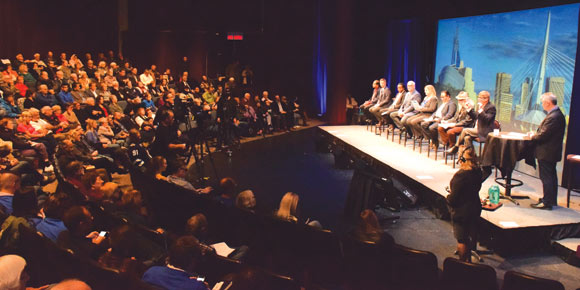 Highlights from the mayoral election forum

On October 4, WinnipegREALTORS® presented Mayoral Forum 2018 in partnership with the Winnipeg Free Press and AVentPro at the Centre Culturel Franco-Manitobain. A key reason for holding this forum was to impress upon Winnipeggers that this is one time when their vote can truly make a difference and shape the future of their city. A promotional message stated: Your City! Your Vote! Make it Count!

Based on the popularity of advance polls leading up to Election Day on October 24, it appears the message is getting out. City Clerk Marc Lemoine indicated to Global News this week that “advance polling is seeing a 32 per cent increase in voter turnout compared to the last election in 2014”. This is a positive development and an indication that Winnipeggers are paying attention and taking their right to vote seriously.

Let’s not forget there are a number of wards without an incumbent city councillor, as well as other contested wards, so this civic election is not just about who Winnipeggers choose to be their next mayor. So, come October 25, there will be a number of new faces around the 16-member city council. Winnipeggers will also vote for school trustees and answer yes or no to the question: “Do you support the opening of Portage and Main to pedestrian crossings?”

Election Day is quickly approaching, and advanced voting is already taking place. It is highly recommended that anyone with questions or uncertainly as to what you need to do to vote, and where you can vote in advance or on Election Day, go to winnipeg.ca/election2018. The City of Winnipeg has done a terrific job of providing everything you need to know, so there is no excuse to not exercise your franchise and vote.

Another reason WinnipegREALTORS® held a mayoral forum — with the exceptional support of the Winnipeg Free Press and excellent production presentation by AVentPro — was to help inform Winnipeggers on the important civic issues that mayoral candidates should be addressing in seeking electoral support for their candidacy. This is in fact what happened, with democracy on full display with all eight candidates running for mayor present and engaged in answering questions. The candidates were also allowed to ask a question of their own of a candidate of their choice in two rounds of candidate-to-candidate questions.

Without being able to summarize over two hours of back and forth with all the candidates, and their responses to the many questions asked of them, it is worth noting that for the first time WinnipegREALTORS® was able to keep this forum much more focused on housing than it has been able to do in previous ones. In fact, CBC called it a “housing forum”. This was underscored by how moderator Brad Oswald, “Perspectives” editor of the Winnipeg Free Press, set up the question for candidate opening remarks. It read as follows: “Owning a home for most people will be the most important investment they will make in their lifetime. As mayor, what will you do to ensure the value of that investment is protected?”

A common response to this question from a number of candidates was “public safety”. This civic election in particular has brought safety and the meth crisis to the forefront at these forums. REALTORS® understand, as well as anyone, that if people don’t feel a neighbourhood is safe, they will invest elsewhere.

On a topic important to every homeowner, the next question asked was regarding impact fees specifically: “How would you adjust impact fees and involve stakeholders in the process?”

With the exception of incumbent mayor Brian Bowman, the other candidates were quite critical of the fees. Don Woodstock said they are nothing more than a cash grab and he would scrap them. A few candidates said impact fees are a deterrent to new investment. Doug Wilson, former mayor of Morden, said that taxes need to be clarified so we know what we’re paying for. For example, are the revenues going back into the new development in question?

Other questions related to housing referred to residential and commercial development happening outside the City of Winnipeg, infill development, keeping Winnipeg affordable, neighbourhood renewal, infrastructure and public transit to, name a few. A number of questions were not directly answered at all, or were answered in a cursory fashion. In fairness to the candidates, with no apologies from the organizers, there was emphasis placed on keeping things moving, so time to respond was limited.

All 8 candidates responded to the question: “What infrastructure plan do you have for the city and how do you intend to pay for it?”  This resulted in Jennifer Motkaluk responding directly to Bowman’s answer, which referred to a billion-dollar road plan. She said that it’s not about how much money we spend, it’s about the outcomes we achieve. Motkaluk added that we can do more with less and build roads better.

Where things became even more interesting and engaging was during the two rounds of candidate-to-candidate questions. Candidates became more animated and personal in some cases, but this was not unexpected given what is at stake.

On a final note, we should all appreciate any citizen who steps up to run for office. However, at the same time, we need to hold all elected officials accountable for the trust voters place in them. Become informed and vote! Your vote does make a difference!