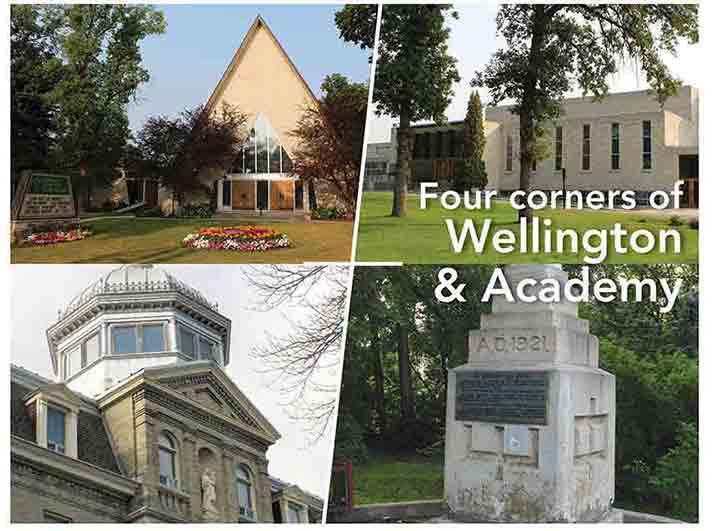 The four corners of Wellington and Academy

The intersection we now know as Wellington Crescent and Academy Road has been a busy place since the days of the Red River Colony. In the 1860’s, for instance, James Mulligan ran a ferry service from the foot of what is now Sherbrook Street across the river to bring farmers and wood harvesters back and forth to the city.

By 1894, the demand for crossings had increased to the point that the city built the first Maryland Bridge, a narrow, steel truss structure. This was replaced by a concrete arch bridge in 1921 and the present dual-span bridge was opened in 1969 and 1970.

At the north-west corner of the intersection is a small park that contains one of the pillars from the entrance to the 1921 bridge with a commemorative plaque celebrating the current bridge’s opening.

By the time the second bridge was built this intersection was the gateway to Winnipeg’s poshest residential enclaves including Wellington Crescent, Crescentwood and River Heights. To create an entrance befitting such neighbourhoods there was no choc-a-block urban development allowed. Instead, it features buildings set far back from the street behind generous expanses of greenery.

To celebrate Manitoba’s Centennial in 1970 the three religious organizations that call the intersection home and the Shriner’s Temple located further east on Wellington Crescent joined forces to hold a “Four Corners Festival” that attracted nearly 1,000 people.

Festival-goers attended an opening reception hosted by Lieutenant-Governor John McKeag at the Shriners Temple that was followed by a concert at St. Mary’s Academy. From there, it was a tour of the Church of the Redeemer and a closing ceremony at Shaarey Zedek Synagogue.

The oldest building at this intersection is St. Mary’s Academy located at the south-east corner.

Founded in 1869 by the Catholic Church to educate English-speaking Catholic colonists, its long-time home on Notre Dame Avenue East found itself in the heart of the busy industrial expansion taking place in what we now call the Exchange District.

Wanting a more peaceful setting and room to expand, the school purchased this 15-acre site as their new home.

Construction began on the site in April 1902 and the four-storey, $75,000 building was officially opened on September 3, 1902 for a student population of 148 borders and 48 day students.

The building’s architect was Samuel Hooper who is known for such landmarks as the Winnipeg Land Titles Building and Carnegie Library. The year after the college was built, Hooper was appointed Manitoba’s first provincial architect and would design provincial buildings such as court houses and land titles buildings throughout the province.

St. Mary’s Academy has undertaken two major expansions on this site. The first was a four-storey addition to the south side of the original building which opened in February 1910. In 1964, a new wing containing a library, theatre and gymnasium were added to accommodate its student population which by that point had reached the 600 mark.

Congregation Shaarey Zedek, which translates to “The Gates of Righteousness”, was established in 1899 in a small building on King Street and Henry Avenue. In 1907, it relocated to a new synagogue on Dagmar Street.

By the end of the Second World War the size of Winnipeg’s Jewish community had increased dramatically and was moving away from its traditional inner-city neighbourhoods. The congregation decided that it would build its new home south of the Assiniboine River.

The new building was designed by architects Green, Blankstein and Russell and runs for 55 metres along Wellington Crescent. It is a two-level building with a worship area that can seat 1,500 people upstairs. The bottom level contains offices and space for its religious school.

Construction began in November 1949 but the Red River flood of 1950 caused significant damage to the footings of the partially constructed building. After significant repairs, construction resumed and the new Shaarey Zedek Synagogue was dedicated on October 9, 1950.

Lutheran Church of the Redeemer (1962)

The roots of this congregation date back to 1930 with the arrival in Winnipeg of Reverend Richard Menzien of the Concordia Seminary in St. Louis. Its first home was in rented space at the U of M’s former Music and Arts building on Broadway at Hargrave Street.

In 1941, the church bought this site at the south-east corner of Wellington and Academy. Five years later, its first church was built. It was a very traditional looking stone building with gothic features that could hold 160 worshippers. A parish hall was added a decade later.

In 1962, the church had run out of space and the congregation decided to demolish and replace both structures.  While construction was underway they worshipped at the Kelvin High School auditorium.

The new 460-seat church designed by Macleod & Reimer Architects is an A-frame structure infilled with Tyndall-stone and an immense, triangular stained-glass window. A single-storey, 400-seat hall, also clad in Tyndall stone, is situated to the south.