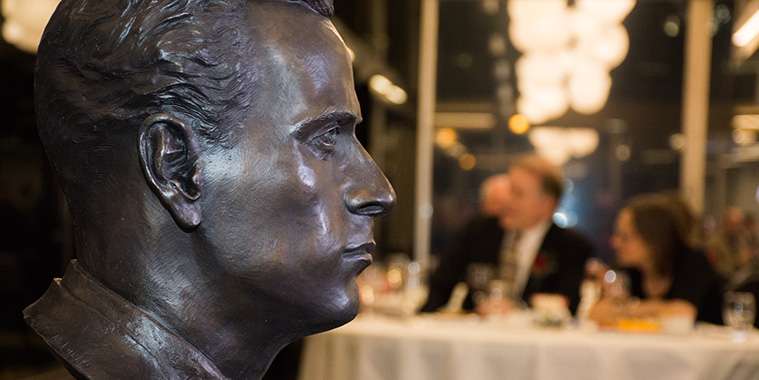 It’s a saying that we’re all familiar with: “the medium is the message.”

And while most Manitobans would recognize Marshall McLuhan as the author of the groundbreaking statement, they might not know he spent his formative years in Winnipeg.

As it turned out, the U of M was the launching point for McLuhan, who earned his Masters in English Literature at the institution in 1934.

Shortly after, he left for England to continue his studies at the University of Cambridge.

After that, he taught English at universities in the U.S. and Canada before moving to the University of Toronto, where he taught media studies courses and wrote his seminal work, Understanding Media, in 1964.

“Marshall McLuhan was one of the most influential thinkers of the Twentieth Century,” said Andrew Smith, Conservative MLA for Lagimodiere, who spoke on behalf of the Premier of Manitoba, Brian Pallister. “His ideas had a global reach and inspired so many people.”

WinnipegREALTORS® president Kenneth Clark said that McLuhan — the 46th inductee to the Citizens Hall of Fame — was shaped by his time in Winnipeg.

“Stories have it that he would walk from his home on Gertrude Street through Osborne Village to the U of M campus, which in those days was on Broadway,” he said. “His induction takes on a special impact here at the U of M in the room that was named after him.”

Not only is the stately function room quietly spectacular with its glass and tyndall stone walls, but so is the bust of McLuhan that was designed by Winnipeg-based sculpture specialist Madeleine Vrignon.

Taken from 1935 photo — she only had one image to work with — it perfectly captures the likeness of McLuhan, who was then in his early-to-mid-twenties.

“I think it’s a magnificent job. I love the work and am proud to have this part of Marshall’s life commemorated – it was just before he went to Cambridge,” said McLuhan’s son Michael, who flew in from Toronto to accept the 2019 Citizens Hall of Fame Award on his father’s behalf. “It’s also my first time in Marshall McLuhan Hall — it’s very impressive.”

McLuhan said his father would have appreciated the finely crafted sculpture and the 2019 Citizens Hall of Fame induction.

“He loved Winnipeg, and I know he would have been tickled pink to accept the award. It’s too bad it took over 30 years to get here,” he said with a laugh. “But better late than never. Thank you for this truly magnificent work, and the award.”

Founded in 1986 by REALTOR® Harry De Leeuw in collaboration with former Winnipeg mayor Bill Norrie, the Citizens Hall of Fame recognizes Manitobans who contributed to Winnipeg’s quality of life with exceptional achievements in leadership and community service.

A link to all inductees, is available at winnipegrealtors.ca/community/citizens-hall-of-fame.