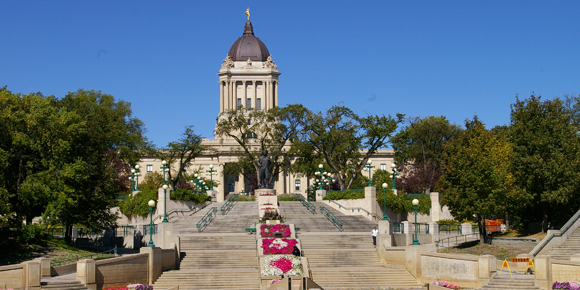 If one word were to be used to characterize Manitoba’s new premier, Brian Pallister, it would almost surely be ‘competitive’.

No matter whether he was playing basketball at Brandon University, teaching, dispensing financial advice to clients as a financial advisor – or as a politician – it’s always been abundantly evident that a white hot competitive fire burns deep in his belly.

Consequently, when he took to the podium at the Winnipeg Real Estate Forum – which was held at the RBC Convention Centre on Tuesday, May 17 – Pallister said that Winnipeg, and by extension, Manitoba, needs to become more competitive.

Pallister said his government’s focus will be on making Manitoba more competitive across the board, citing key areas such as the province’s flagging education system and reducing emergency room wait times.

He said moving in that new direction will entail listening to people, eliminating waste, improving services and lowering taxes. At the same time, there are areas where immediate improvements can be made.

“Over the next six months, our goal is to start making Manitoba a top destination for trade and tourism because Manitoba is a province that deserves to be promoted,” Pallister said, adding that $1 million per year will be invested into infrastructure. “We will also use our Team Manitoba model to partner with people to be a business facilitator. We will also provide better access to venture capital in the province. Those things are critical for economic growth in Manitoba.”

Douglas Porter, Chief Economist and Managing Director, BMO Financial Group, then took to the podium to provide an economic outlook for Manitoba, and the Winnipeg market. He said the outlook for the city and province is largely positive.

“There’s been stable recent growth, the province’s economy remains highly diverse, manufacturing and exports are benefitting from the lower loonie, and population growth is solid,” he said. “One of Manitoba’s biggest challenges is that budget deficits persist.”

Budget deficits aside, he said Manitoba figures to retain its “Steady Eddie” bearing.

“In 2016, Manitoba’s real GDP (Gross Domestic Product) is predicted to be 2.5 per cent, which would make us number three in Canada behind British Columbia (3.3 per cent) and Ontario (2.7 per cent). Retail sales should be about 7.1 per cent (again putting Manitoba third behind B.C. and Ontario). Growth should be solid and steady in 2016, and we expect a similar shape to the curve in 2017.”

He added that there’s other good news.

“Right now, Manitoba’s jobless rate is one of the lowest in the country at about a percentage point below the average; it should nudge down to the high fives (percent). Winnipeg’s real estate market has also been steady, with sales up in April. Sales figure to be up about five per cent, with prices rising by about two per cent. Everything in the market is in good balance,” said Porter, adding that the recent recovery of the Canadian dollar and oil prices is also positive news.

“Initiatives like tax bracketing and rolling back the PST won’t make us the most competitive province overnight, but it’s a start,” he said. “There’s a lot of hard work to be done, and it will take two terms to do it. We’re going to listen to the people of Manitoba, because that’s the only way to be more effective in making the province better. The good news is Manitobans aren’t afraid of hard work. We’ll work together with them to make the province a better place.”

While that work has just begun, Pallister sees a bright future for the province.

“The only better thing than today in Manitoba is tomorrow,” he concluded.