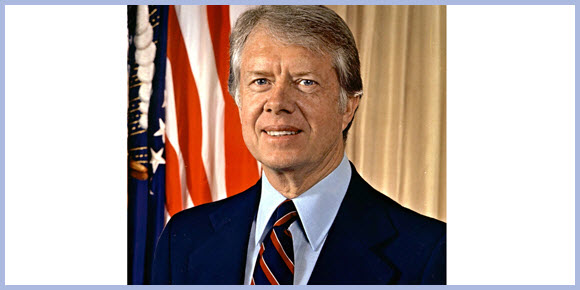 Former U.S. president returning to city for another Habitat for Humanity building spree

The first time former U.S. President Jimmy Carter and his wife, Rosalynn, travelled to Winnipeg for a Habitat for Humanity home building spree was in 1993.

During the Carter Work Project ’93, they helped build 18 houses in five days, from July 19 to 23, between Dufferin and Jarvis avenues in the Lord Selkirk Park neighbourhood. One of the houses was sponsored by WinnipegREALTORS®, which raised $50,000 towards its construction.

The Gomez family, who had been living in rental social housing, became the proud owners of the newly-built home.

The “urban barn-raising” was unique because it was the first time that the Carters had ventured to Canada for a Habitat for Humanity home-building project.

With their return this year to help Habitat build 25 new homes for less-privileged families in Manitoba, WinnipegREALTORS® is again an active participant. The association is the presenting sponsor for a fund-raising lunch with the Carters on July 13 at 11:30 a.m. at the Viscount Gort Hotel, 1670 Portage Ave.

“It is unusual for them to return to a city where they have already worked, so we are doubly honoured to have them join us again,” said Michelle Pereira, the vice-president of marketing, communications and philanthropy for Habitat for Humanity Manitoba.

The Carters are coming to Canada between July 9 and 14, when Habitat for Humanity will be building 150 homes in 40 communities to celebrate Canada 150. The Carters will be focusing their efforts on builds in Winnipeg and Edmonton. They will be in Winnipeg on July 13 and 14.

To mark the occasion, the governments of Canada and Manitoba are investing $1.2 million to help more Manitobans become homeowners through Habitat for Humanity’s Carter Work Project.

“Habitat provides such an effective model in homeownership and creates pride and confidence by giving people the opportunity to build their own home,” said Manitoba Families Minister Scott Fielding at the Winnipeg build site on Lyle Street in St. James. “Safe housing lifts people up, helps families succeed and builds healthy communities.

“Manitobans are excited to volunteer with this valuable project to address poverty and homelessness as part of Canada’s 150th birthday.”

“Our government is proud to contribute to the largest build in Habitat Canada history and we look forward to continuing our strong relationships with our valued partners,”  said Doug Eyolfson, MP  for Charleswood-St. James-Assiniboia-Headlingley.

“Habitat Manitoba’s commitment to the Carter Work Project is to construct 25 new homes and we could not possibly meet that objective without this financial support from the federal and provincial governments,” said Sandy Hopkins, CEO of Habitat for Humanity Manitoba.

“Our total investment to build the 25 homes is about $6.5 million, but that investment will generate over $40 million in value to society over the next 50 years, in today’s dollars.”

Habitat for Humanity Manitoba will build 21 new homes in Winnipeg, two in Portage la Prairie and two in Brandon.

It selects qualifying families willing to contribute up to 500 volunteer hours of sweat equity in the construction of their home, and sells them homes at fair market value. It holds the mortgage at zero interest, requires no down payment and bases repayment on a percentage of annual income.

“We have a nice home to live in, have a modicum of wealth,” but “we have many neighbours who do not have those things,” said the former U.S. President in 1993.

He added that Habitat has provided him with a “concept of life I had not experienced,” and the motivation to break down the barrier between rich and poor.

The joint funding for the Habitat project in Manitoba is part of a 2016 Investment in Affordable Housing (IAH) extension agreement of $90 million over two years between the Manitoba and Canadian government through the Canada Mortgage and Housing Corporation (CMHC).

Details of the 2017 project and tickets for the luncheon are available at www.habitat.mb.ca