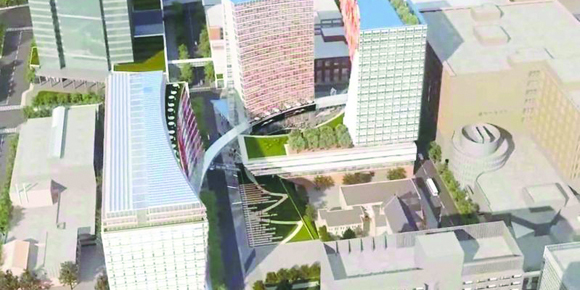 A growing Winnipeg economy is expected to sustain the local real estate market, according to a new report from Price Waterhouse Coopers (PwC) Canada and the Urban Land Institute (ULI) Canada.

The report stated that Winnipeg is one of the top-5 Canadian markets to watch over the next year.

The Emerging Trends in Real Estate 2017 report indicated that Winnipeg’s economy is expected to grow this year and next, primarily through growth in the manufacturing and local goods sectors.

“Building activity should remain healthy over the short term, propelled mainly by non-residential projects such as the $200 million Outlet Collection Winnipeg Mall and the massive $400 million True North Square project and its four mixed-use towers.”

While the commercial real estate market is on the upswing, the report indicated that the housing market will cool slightly after experiencing significant growth for both single-family and multi-family units in recent years.

Despite the perennial speculations of a housing market crash, there is room for growth in the Canadian real estate market as investors are moving east and towards more mixed-use developments, according to the report.

Canada seems poised for a year of stability regardless of concerns about a possible pullback in the Vancouver and Toronto housing markets.

The report indicated that housing affordability, weak income growth, and high consumer debt levels are all contributing to the dip in residential sales in Canada. Compared to the previous year, the average price for housing is expected to decline by 0.9 per cent in 2017 compared to a significant spike of 10.6 per cent in 2016.

A report by Royal LePage showed that the aggregate price of a home in Winnipeg rose steadily in the third quarter of 2016, climbing 2.3 per cent year-over-year to $291,426.

According to the Royal LePage House Price Survey, the median price of a two-storey home increased 4.7 per cent to $322,313.

Bungalow prices remained relatively flat, increasing by 0.3 per cent year-over-year to $271,427. During the same period, condominium prices fell five per cent to $212,067.

“The aggregate numbers in Winnipeg speak to the real estate market overall,” said REALTOR® Michael Froese. “We’re seeing a decrease in inventory and prices have held steady.  With interest rates still low, Winnipeg is one of Canada’s most affordable cities.”

“Opportunities in the Canadian market continue to be abundant, but no two markets are the same,” said Frank Magliocco, partner and national real estate practice leader for PwC Canada. “The unique economic and demographic realities in each region are yielding different options for savvy real estate investors across the country who have their eye on emerging needs and trends in the market."

The emerging trends report highlighted that Canada’s urban populations will continue to grow and their needs will evolve. Mixed-use projects combining residential, retail and commercial parts continue to thrive and there’s a growing consensus that developers must do better when designing public spaces.

Significant increases in immigration over the next five years will continue to keep demand high and put even more pressure on affordability unless more supply is made available, not just in Toronto and Vancouver, but also across the rest of the country.

Statistics Canada indicated in its most recent report that Manitoba’s population increased year-over-year by 1.71 per cent — a record pace.

“Complexity of issues and factors, from public policy shortcomings to shifting market dynamics that are affecting the nature of real estate trends across Canada’s urban regions, is an ever more dominant theme this year,” said Richard Joy, the executive director of ULI Toronto.