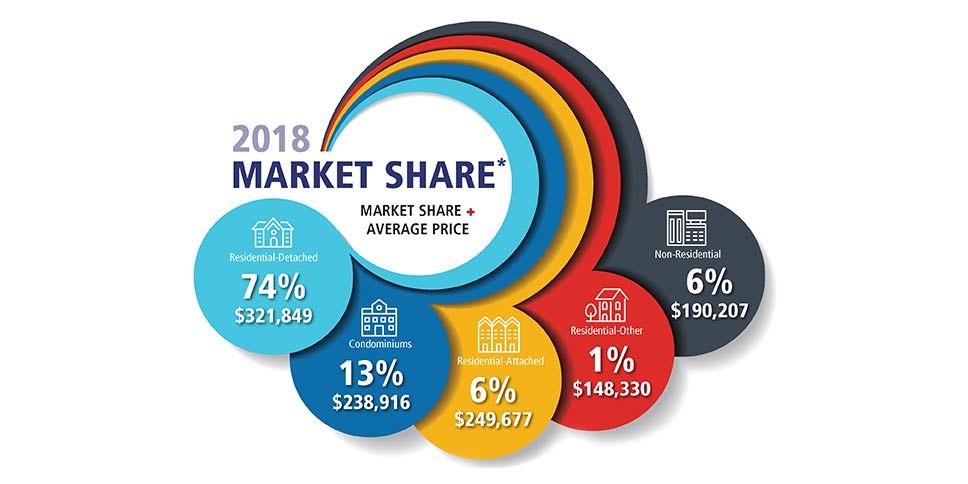 Annual dollar volume on the other hand of $3.77 billion decreased less than 4% from 2017 and is up nearly 3% from the five-year average.

“Keeping things in perspective, with some of the headwinds we faced in 2018 with higher interest rates and more stringent mortgage qualification requirements, it should be no surprise that 2018 fell short of our best years on record,” said Chris Dudeck, outgoing president of WinnipegREALTORS®. “Simply put, we believe fewer buyers were able to qualify and successfully complete a purchase they wished to make in 2018.”

Dudeck added, “I see 2018 as more policy-induced retraction, albeit a modest one, than changes in key market factors from 2017.” Market metrics are closely aligned between the two years. For example, in terms of achieving a total sales price dollar value ratio close to total list price dollar value in 2018 for single family homes which sold, the annual ratio compares very favourably — 98.48% versus 98.59% in 2017. Another metric to note is average days to sell a home or condo in 2018 only took one day longer than 2017.”

Sales transacted in both single-family homes and condominiums were only one day off the number of days on average it took to sell them in 2017. One of the main reasons the WinnipegREALTORS® market region was less affected in comparison to some other housing markets is its favourable housing affordability.

The December 2018 RBC Housing Trends and Affordability Report indicates “ownership costs remain well under control”. The measure of 31% for the third quarter (the percentage of median pre-tax household income required to service the cost of mortgage payments, property taxes and utilities based on the average market price of the aggregate of all housing types) is very close to the long-run average of 29.5%. The RBC Report states: “The slowdown in activity in 2018 has been orderly with demand and supply remaining in balance overall, although the condo segment showed more visible signs of weakness.”

The chart above shows how each of the geographic areas within Winnipeg performed with respect to their average home sales price as well as the area representing rural municipalities. All areas saw slight increases over 2017 with the exception of the southeast area where its price equaled last year’s result.

Two MLS® areas least impacted by buyer challenges were the southwest zone of Winnipeg and the rural municipalities surrounding Winnipeg. The former saw sales decline under 1%, while the latter rural zone decreased 1% in comparison to sales generated in 2017. The rural zone continues to represent the highest percentage of sales of all MLS® areas at over 26%.

“I am proud of how our REALTOR® members worked so hard this past year to meet both buyer and seller expectations given that there were more financing issues to overcome.” said Marina R. James, CEO of WinnipegREALTORS®. REALTORS® operate in an ever-changing real estate industry and continually update their knowledge so their clients are supported through the buying and selling process.”