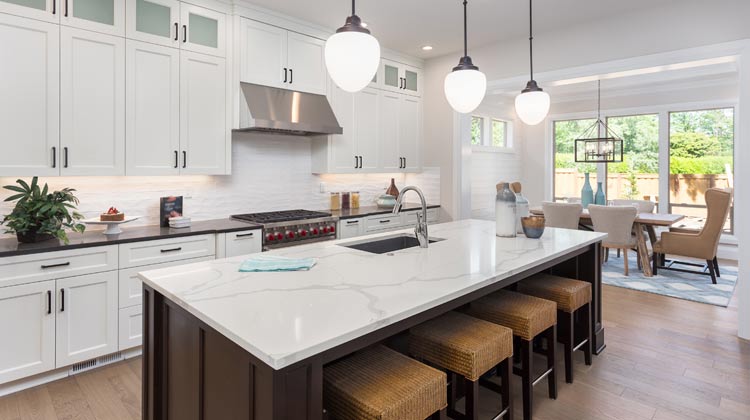 Kitchen design should revolve around effective use of space

Over the years I’ve learned that it’s very difficult to design a great kitchen, but fairly easy to design a good one — in fact, a basic kitchen will usually just about design itself. This assertion may have my kitchen designer colleagues whipping out their Dreizack knives, but no matter.

These kitchens are like old Cadillacs: their size serves merely to impress; it doesn’t make for efficiency. In fact, functionally, a well-designed small kitchen can be in every way equal to a large one except for all those scads of extra storage space.

Regarding appliance locations, the hoary old rule of the “work triangle” remains a useful one. If you draw lines connecting the three major work centres in your kitchen — sink, stove, and refrigerator — the sum of the sides of the resulting triangle should equal at least 13 feet, yet not exceed 22 feet. Ideally, circulation paths should not cross this triangle, though in real life it’s often unavoidable.

There are only four basic kitchen arrangements: U-shaped, Corridor, L-Shaped, and One Wall, and your choice is dictated mainly by the number of doors or other circulation paths that enter the kitchen space.

More openings usually mean less uninterrupted counter space, though not necessarily a less usable kitchen. Because the U-shaped kitchen is entirely removed from through traffic, it ensures both the maximum continuous counter space and the least disruption of the cook. One arm of the U can also serve to divide the kitchen from an adjoining room, such as a family room or great room, in place of a solid wall.

Alas, many older kitchens have multiple doors entering the room, which demands a different arrangement. When the room is long and narrow and has a door at either end, the Corridor (or “Pullman”) kitchen is the ticket. It’s extremely efficient in narrow confines — hence its use on railroad cars — and also simple to plan: The sink goes on the outside wall beneath a window, the range is placed more or less at the center of the counter opposite, and the refrigerator can go at either end on whichever side suits you best.

If the existing room is interrupted by doors entering on two adjoining walls, an L-shaped kitchen usually fills the bill. In this case, the sink once again goes on an outside wall under a window, and the range takes the approximate centre of the counter space on the adjoining side.

Depending on space constraints, the refrigerator can be located at the extreme ends of the “L” on either wall, depending both on your preference and the space available.

The humble one-wall kitchen, which is most often found in efficiency apartments, doesn’t really have a work triangle at all, since the work centres are all in a row. As long as there’s enough counter space between the sink, stove, and refrigerator, this arrangement will serve perfectly well. In fact, it’s ideal for all those single guys who dine on Pop-Tarts over the kitchen sink.