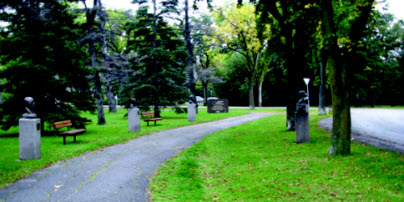 Daniel McIntyre became the 43rd inductee into the WinnipegREALTORS®-established Citizens Hall of Fame at a special ceremony held on Thursday night (September 15) at the school named in his honour.

“Daniel McIntyre has been termed ‘Winnipeg’s Giant of Education,’” said Ted Ransby, the nominee of the educator, who was born in 1852 on a farm near Dalhousie, New Brunswick, and came to Winnipeg in 1882. “As head of formal education (as the superintendent of Winnipeg’s public schools system) for an astounding 43 years ... He had a huge impact on students and the city.

“Tens of thousands were educated during his tenure and many subsequently made their mark nationally and internationally.

“Moreover, large numbers of children benefited from his ground-breaking work in co-founding both the Children’s Aid Society (he was its first president) and School for the Blind.”

As Mcintyre is a posthumous inductee, the bronze medallion signifying his addition to the hall of fame was accepted by Gordon Davies and David Rich, who are descendents of the McIntyre family.

“We have always felt education is one of those undeniable and essential underpinnings of our Citizens Hall of Fame inductees’ drive to succeed and to enable them to reach their goals,” said Rick Preston, the chair of the hall of fame committee, prior to the special induction ceremony at Daniel McIntyre Collegiate Institute.

Preston said at least 10 of the inductees into the hall received their education during McIntyre’s tenure as superintendent of Winnipeg schools.

McIntyre received a BA and MA from the University of Manitoba, and served on the U of M’s Council. The university awarded him an honorary law doctorate in 1912.

In 1935, the Canadian government in recognition of his role in influencing education across the nation. sponsored his appointment as an Officer of the Order of the British Empire (OBE).

“Most of us are not aware of what a driving force Daniel McIntyre was in leading and shaping Winnipeg’s early education system,” said WinnipegREALTORS® president Stewart Elston.

“In the case of this year’s inductee, it can be said thousands of students owe a huge debt of gratitude to this remarkable man ...,” added Elston. “He spent his entire career making his profession such a noble calling by ensuring teachers were well-equipped with new tools and ideas to teach and prepare our future leaders to succeed upon graduation.”

McIntyre was noted during his tenure as superintendent as the “father of Winnipeg’s school system.”

“Until a comparatively recent period,” said McIntyre in 1913, “the schools were organized on purely academic lines and the avowed aim of education was culture and discipline. This aim has, however, been greatly enlarged within the past few years, by including within its scope the development of a sense of social and civic duty, the stimulation of national and patriotic spirit, the promotion of public health, and direct preparation for the occupations of life.”

When McIntyre passed away on December 14, 1946, then Winnipeg mayor, Garnet Coulter, said: “More perhaps than any other single individual, he is responsible for establishing the sound foundations on which the public school system in Winnipeg is based ...”

Then superintendent, Dr. J.C. Pincock, said his passing marked the “close of a career without parallel in the history of education in Western Canada, if not the whole Dominion.”

As an inductee, McIntyre’s bronze portraiture, created by local sculptor Erin Senko, was installed at the Citizens Hall of Fame site in the southeast corner of Assiniboine Park, off Corydon Avenue.

Established in 1986, the Citizens Hall of Fame is a unique program honouring outstanding citizens who have brought recognition to Winnipeg or have made a outstanding contributions to the city’s quality of life.

“The Citizens Hall of Fame program is a reminder of the power within all of us to bring about positive change and make a difference to our city, province and nation” said Elston.