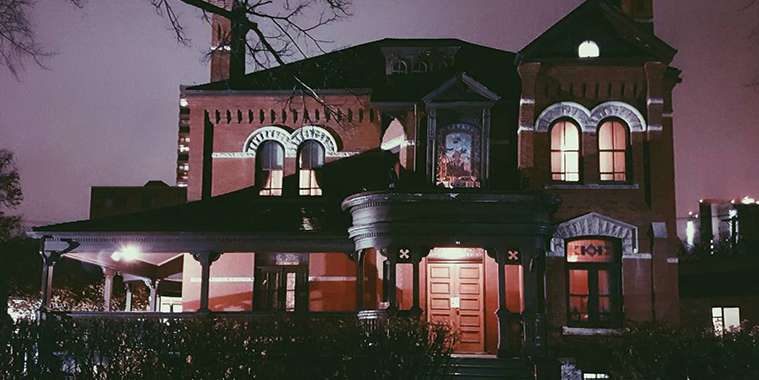 Haunted houses and spooky spots to explore in Manitoba this Halloween

Manitoba is home to some of the oldest buildings in Western Canada. Prince of Wales Fort near Churchill is the oldest still-standing establishment in the province, built in the early 1700s, with Lower Fort Garry following close behind.

Though our historic buildings may not seem old compared to ancient castles and churches around the world, they are certainly old enough to be the birthplace of many spooky stories and tales of terror. Here are six historic places to visit in Manitoba that may or may not be haunted. (We’ll let you make the final decision.)

Seven Oaks House is Winnipeg’s oldest and supposedly most haunted house. It was built in 1851 for the Inkster family. Mary Inkster frequently suffered from migraines and nausea and had an upstairs bedroom where she would rest when she was unwell. Some staff at Seven Oaks House now report feeling those same symptoms when they enter Mary’s old room. People have also claimed fog has seeped into the dining room from under the door while they’ve tried to reach out to the spirit world. Whether the house is haunted or these are simply signs of an old home, we may never know. But you can visit the site for yourself when it’s open in the summer months or hop on the Trolley of Terror and get a look inside a few of the rooms after dark.

The Victorian era was a time marked by death. The invention of new and more dangerous machinery meant more people were dying before their natural time. In the fall, Dalnavert is a house in mourning. It displays the mourning traditions that were followed in the Victorian era when the home was built. Mirrors are covered in black cloth, portraits on the walls show people in black mourning clothing and the clocks are stopped since it was believed that if you didn’t stop the clocks when someone died, their spirit would remain to haunt the house.

Whether there is a spirit that stayed behind in this house, you’ll have to visit to find out for yourself. Participate in the family-friendly Tour and Scavenger Hunt being held on October 30 and 31. After dark on October 31 you can take part in The Empty House: Encore Edition guided tour (via headphones) — if you dare!

The most famously haunted building in Winnipeg is the Fort Garry Hotel. There seem to be a few guests here who never left, even after death. Many staff members have reported a phantom diner who sits at a table near the window in the Broadway Room, harmless enough. Room 202, however, is known for a few more chilling tales. Visitors who stay in this room have reported objects moving, phones and cameras not working, and feeling a presence lying in the bed beside them. Many guests who dare to stay in this room request a room change before the end of their stay. Would you dare to stay in Room 202? Learn more by hopping on the Trolley of Terror or participating in the Broadway Ghost Walk.

On the outskirts of Portage la Prairie sits Fort la Reine Museum. The museum is made up of 25 buildings built between 1879 and 1940. Paranormal activity has been reported in four of these buildings, making this a perfect location for a frightful night. One of the supposedly haunted spots is the train car used by Sir William Van Horne. Its narrow, claustrophobia-inducing hallway leads to Van Horne’s former bedroom where interpreters at the museum have said they’ve found objects moved and clothing (part of the exhibit) in complete disarray. Unfortunately, Fright at the Museum is now over, but put this on your Halloween bucket list for next year. Don’t forget to visit their corn maze next year as well for a good scare!

At over 175 years old, it’s no wonder Lower Fort Garry is supposedly haunted. The construction dates of the fort’s seven main buildings range by a few years but the artifacts and historic interpretation all harken back to the 1850s when the grounds were in peak use.

The Big House, built for a governor of the Hudson’s Bay Company, is one of the fort’s hotspots for odd occurrences. Some people have claimed to see the ghostly apparition of a woman in white in the basement kitchen and more than a few seances have been hosted in the parlour. People have also reported feeling the presence of past residents in the warehouse which at different times was used as a jail and an asylum. Paranormal investigators and ghost hunters often make this one of their must-visit stops when in Manitoba.

Though not technically a building, this still counts as a spooky site. The S.S. Keenora is the largest ship at the Marine Museum of Manitoba where you can explore its inner bowels including the sleeping compartments and boiler room. The S.S. Keenora was built in 1897 and served as a passenger steamship for about 50 years before being decommissioned and moved to the Marine Museum of Manitoba.

Even in the daytime, the narrow hallways, abrupt corners and rooms with seemingly no exit make this one unpredictable place, but come nightfall it truly feels like a ghost ship. Some claim they’ve heard the sound of a piano being played in the parlour area where dances were once held, and it’s hard to shake the feeling that something could pop out from behind a corner at any moment as you make your way down the hall. You can only get inside the boats after dark during the Marine Museum’s annual Halloween Haunt, but sadly, this event has been postponed due to Covid restrictions until next year.

There are many more supposedly haunted spots in Manitoba including homes where spiritualism and seances were frequently practiced, theatres with ghostly audience members, and empty buildings filled with haunting noises. Discover all of these haunted Manitoba locations yourself or take one of the ghastly Ghost Walk tours offered in Winnipeg around Halloween.

Wherever you travel in Manitoba, please remember to stay safe by gathering in group sizes in accordance with public health guidelines, staying home if you’re sick, wearing a mask when required, and getting vaccinated.