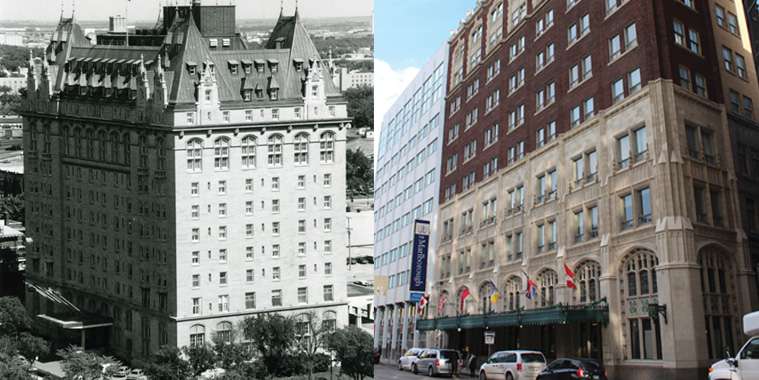 It was announced back in October that Winnipeg’s Fort Garry Hotel is up for sale. It and the Marlborough are the last remaining grand, old downtown hotels that have been part of the city’s fabric for over a century. Here is a look back at their history.

The Fort Garry Hotel was the final piece of the Grand Trunk Pacific Railway’s multi-million-dollar investment in Winnipeg in the early 1910s that started with the development of a 70-acre rail yard at the junction of the Red and Assiniboine Rivers and the construction of Union Station.

The 256-room hotel was designed by architects Ross and Macdonald of Montreal in the “chateau style” popular with railways at the time. Other examples of their work include the Royal York in Toronto, the Hotel Macdonald in Edmonton and the Chateau Laurier in Ottawa.

The hotel was to be called the Lord Selkirk but by the time the $1.5 million building permit was issued in September 1911, it had been renamed the Fort Garry after the nearby landmark. The hotel hosted its first major function, the annual ball of the Victoria Order of Nurses, on December 10, 1913 and officially opened the following afternoon.

The Hotel Fort Garry exudes luxury and elegance though its early advertising shied away from making it seem too exclusive. It was, after all, a railway hotel and needed hundreds of middle-class travelers to come fill its rooms each week. Its four banquet spaces hosted special affairs like gala balls but what really kept them in business were more pedestrian daily events such as Rotary Club meetings, sports club banquets and music recitals.

Walking through the doors of the Fort Garry Hotel today, one might think that it always maintained its lustre, but it did go through some dark decades.

Passenger train travel, the life blood of the hotel’s rooms, declined sharply through the late 1950s and early 1960s. It also faced competition from new types of hotels such as motor inns with their own banquet facilities and downtown high-rise hotels offering larger, brighter rooms and modern amenities.

CN Rail, which absorbed the Grand Trunk Pacific’s assets in 1923, lost more money on the hotel with each passing year and rumours swirled about the hotel’s closure and possible demolition to make way for new development. City council’s property committee announced in early 1979 that it would not consider the approval of a demolition permit for the building.

The hotel was sold in late 1979 to a local businessman who ended up in a protracted legal dispute with the city over the building’s property tax bill. It was sold again in 1988 and much of its long-neglected infrastructure, such as electrical and plumbing systems, were brought up to modern standards.

It was following its last sale in 1993 that significant investments of time and money were made to restore its interior back to its original glory.

The Marlborough Hotel had more modest financial backers than the Fort Garry in the form of four Italian immigrants.

Giuseppe Panaro and Leonardi Emma came to Winnipeg from Sicily in 1892 and together operated a confectionery store and café on Main Street. Brothers Augustine and Joseph Badali operated a similar business on Portage Avenue at Smith Street called The Olympia.

When a sizeable piece of land came up for sale on Smith Street in 1913, the four banded together to build a $900,000 luxury hotel called The Olympia. Architect James Chisholm’s three-storey, gothic inspired building was designed so that additional floors could be added later.

The building’s gothic theme extends inside, and its interior is rich with oak paneling and features such as stained-glass windows and lamps from Tiffany and Co. of New York. To ensure the hotel lived up to its luxurious appearance, the owners hired A. T. Folger from Ottawa’s Chateau Laurier to run it.

The Olympia opened in November 1914 during World War I which caused great disruption in the travel industry. As an independent hotel The Olympia didn’t have a steady stream of railway passengers to fill its rooms and as a result went bankrupt in May 1915.

The federal government leased the empty building in February 1916 to be the recruiting centre and barracks for the 184th Battalion. It took just a week to outfit it with army issue furniture and the 184th boasted in recruitment ads that it had “ the finest barracks in Canada.”

The travel industry rebounded after the war and new owners found that The Olympia was worth investing in. It closed in 1921 so that an additional six-storeys could be added which brought its total number of rooms to 230. It reopened on July 10, 1923 under a new name: The Marlborough.

The Marlborough saw the coming competition from new hotels and reacted early. On February 4, 1960 it opened a new extension that featured 200 modern rooms topped off by the grand Skyview Ballroom.